“Jimmy Kimmel Live!” similarly to “The Late Show with Stephen Colbert” over on CBS, returned Monday from hiatus and on his first night back, Jimmy Kimmel was caught in a familiar situation: the big political news of the day was happening after they recorded Monday’s episode.

So the host had to get creative with his jokes about Trump’s new Supreme Court nomination, opting for a sort of catch-all lampooning that would work for anyone who is the sort of person that the president would conceivably pick.

“Tonight was a bigly night for our celebrity appresident,” Kimmel said, tossing out a “Celebrity Apprentice” pun as he opened this portion of his monologue.

Also Read: Colbert: Maybe We Should Get a Doctor Who Isn't 'a Pill-Popping Dealer Who Drank on the Job' to 'Test Trump's Brain' (Video)

“Tonight from the White House, the primetime Supreme Court nominee special hosted by you know who,” Kimmel said.

Which it had by the time “Jimmy Kimmel Live!” aired, but the taping was happening about two hours before. But the pretense was all just set up.

“It was on all the major networks. It even interrupted ‘The Bachelorette’ here at ABC, which is a no-no. They had the first hour of ‘The Bachelorette,’ then the Supreme Court announcement, and then the Final Rose Special hosted by Chris Harrison,” Kimmel said. “Trump, as he has been known to do, announced his announcement multiple times on Twitter. He wrote, ‘Big decision will soon be made on our next Justice of the Supreme Court!’ Then yesterday: ‘Looking forward to announcing my final decision on the United States Supreme Court Justice at 9:00pmE tomorrow night at the @WhiteHouse.’ And then today: I have long heard that the most important decision a U.S. President can make is the selection of a Supreme Court Justice – Will be announced tonight at 9:00 P.M.’

” ‘I have long heard’ for Donald Trump means they said it this morning on ‘Fox & Friends.’ I don’t know why he has to be so dramatic about this kind of thing. No one needs more suspense. Just give us the name of your nominee so we can move on with our terrifying lives, okay?”

“There’s a lot of speculation about who Trump would pick but very few, in fact, none of the experts predicted this,” Kimmel said as the show rolled a clip in which Trump, his voiced dubbed over, announced that the Harry Potter villain Lord Voldemort would be his nominee. 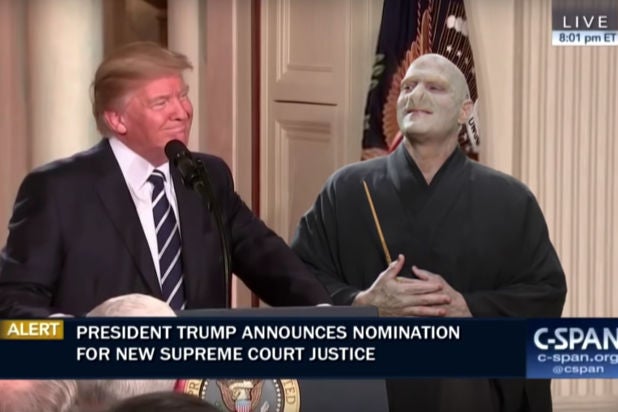 In the video we see a man dressed up as Voldemort, with his weird face makeup and everything, arrive next to Trump in a cloud of smoke and even shake Trump’s hand.

But you really should see the bit for yourself, which you can do in the YouTube video embedded at the top of this post.