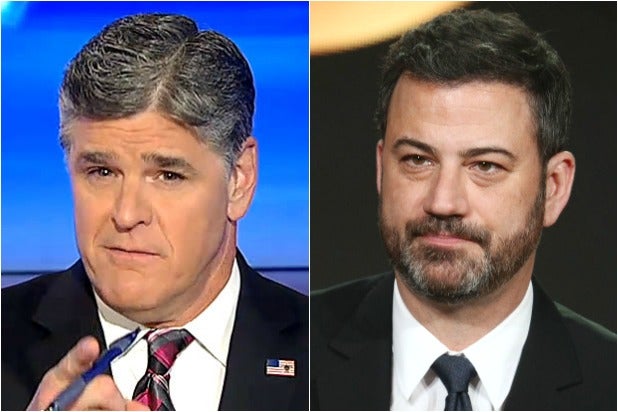 One of the biggest stories in the world of night time talk shows over the past week was the simmering feud between Jimmy Kimmel and Sean Hannity that spilled over from their respective shows onto Twitter. But the spat, which began when Hannity expressed outrage over Kimmel making fun of Melania Trump’s accent, came to a close this week when Kimmel issued an apology for the whole thing and Hannity declared on Monday that he too would back down.

Hannity also, in his comments about the feud on his show Monday night, invited Kimmel to appear on his Fox News show to have a “serious discussion.” On Tuesday, during Kimmel’s first show after Hannity issued the invitation, did not acknowledge that invitation or even refer to Hannity at any point during the show. “Jimmy Kimmel Live!” tapes around the same time that Hannity airs, so Kimmel wouldn’t have been able to respond on Monday night.

Kimmel also has not tweeted about Hannity since issuing the apology on Sunday morning.

On Monday, Hannity spent the last segment of his show answering the apology, which he said felt “forced,” before inviting Kimmel on his show.

“I wanna extend an invitation. You wanna come on this show, I’ll promise no name-calling, no anger, no rehashing of the Twitter fight,” Hannity said. “We wanna have a serious discussion, we can talk about the president, his policies, healthcare, comedy, political correctness, any boycotts, how I’ve supported Bill Maher, Howard Stern, Don Imus, Opie and Anthony, people I disagree with vehemently. What I bet is you’ll actually agree with me on a lot more issues than you think.”

For those who haven’t been keeping up, this whole conflict was inspired by Kimmel’s jokes from his show on April 2, in which he made fun of Melania Trump’s pronunciation of “this and that” when she was reading a children’s book out loud at the annual White House Easter Egg Roll. On April 4, Hannity spent a chunk of his show berating Kimmel for the joke, calling him “despicable” and an “a– clown.”

Kimmel came back at Hannity during his own monologue the next day, and then the whole thing continued with barbs on their shows and a long exchange of really mean tweets at each other. Hannity dredged up an old clip from Kimmel’s days on the Comedy Central’s “The Man Show,” and Kimmel took shots at how Hannity has been trailing Rachel Maddow in the ratings. And Kimmel caught a lot of flack for a tweet in which he said, “Don’t worry – just keep tweeting – you’ll get back on top! (or does Trump prefer you on bottom?),” a comment that a lot of founds found homophobic.

It was the outcry over that tweet that sparked Kimmel to try to end the feud, and below is the apology he tweeted on Sunday:

“While I admit I did have fun with our back and forth, after some thought, I realize that the level of vitriol from all sides (mine and me included) does nothing good for anyone and, in fact, is harmful to our country. Even in 2018, the vile attacks against my wife and wishes for death on my infant son are shocking and I encourage those who made them to give their words and actions thought. I, too, will give my words more thought and recognize my role in inciting their hatefulness. By lampooning Sean Hannity’s deference to the president, I most certainly did not intend to belittle or upset members of the gay community and to those who took offense, I apologize. I will take Sean Hannity at his word that he was genuinely offended by what I believed and still believe to be a harmless and silly aside referencing our First Lady’s accent. Mrs. Trump almost certainly has enough to worry about without being used as a prop to increase TV ratings. I am hopeful that Sean Hannity will learn from this too and continue his newly-found advocacy for women, immigrants and First Ladies and that he will triumph in his heroic battle against sexual harassment and perversion.”

After Hannity responded to Kimmel’s apology on Monday, he also issued a threat that they have more old unflattering footage of Kimmel to air if he tries to re-up their feud or take more shots at Donald Trump’s family.

“Unfair attacks, there needs to be an end to them. There’s no shortage, by the way, of comedic material out there. Jimmy, if you do want to start up again, I promise I’ll punch back even harder,” Hannity said. “My producers spent all weekend compiling a lot of your highlights, or lowlights, in your career. They don’t make you look too good. So instead of airing them, we’ll put ‘em in storage, and we have more important pressing issues like what’s happening in Syria and the gassing of women and children.”