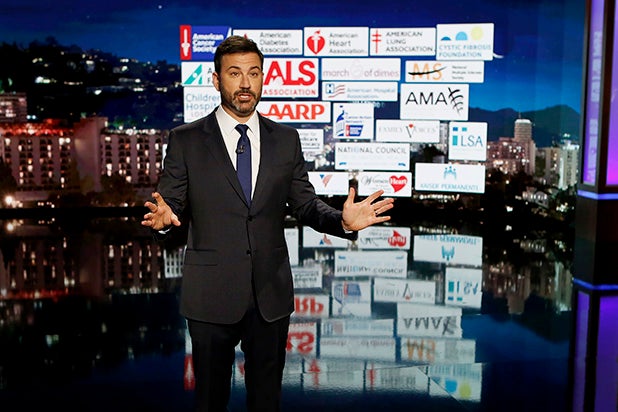 Jimmy Kimmel, America’s mildest-mannered late-night comic, became an unlikely folk hero last week by seizing the center of a heated political debate over health care and refusing to let go. Even more unlikely: He seems to have emerged the winner.

The surprising transformation of the ABC late-night host — better known for viral prank videos and his mock feud with actor Matt Damon than for incisive political commentary — riveted and mobilized a national political debate over health care, with an impact that stretched far beyond his late-night audience, across social media, the Washington establishment and all the cable news networks.

Given the comedian’s persona as a mischievous wise guy, the week of prolonged sincerity was a surprising change of tone — one that’s probably as unfamiliar to Kimmel himself as it was to his viewers.

“His typical stance is disengaged mockery of everyone rather than satirical critique, so the novelty of him becoming overtly political stands out,” said Jason Mittell, professor of film and media culture at Middlebury College and author of the book “Complex TV: The Poetics of Contemporary Television Storytelling.”

And by departing from his persona, he may have had more impact — and proved more difficult to dismiss — than rival late-night hosts like Stephen Colbert, Seth Meyers, Trevor Noah, John Oliver and Samantha Bee who have made sharp-edged, typically left-leaning political commentary central to their acts.

“Kimmel tells a lot of Donald Trump jokes, but we don’t put him in that same category that we put Stewart and [John] Oliver and Samantha Bee,” Bob Thompson, professor of TV and pop culture at Syracuse University, told TheWrap. “That is one of the reasons that people [paid] attention. It’s like if your dad has never cried in his life — when he cries, you pay attention.”

Also Read: Sen. Bill Cassidy Swipes Back at Jimmy Kimmel on Health Care: 'He Does Not Understand' (Video)

Night after night in a series of increasingly earnest monologues, Kimmel turned his traditionally light-hearted show into a beacon of political activism and rallied his viewers to lobby against a bill authored by Republican senators Bill Cassidy and Lindsay Graham to repeal Obamacare.

He challenged Cassidy on social policy and responded to critics who said Hollywood should butt out by doubling down on his positions — fueled by the personal saga of his infant son’s medical treatment for a heart ailment that he said would be considered a coverage-rejecting pre-existing condition in the Cassidy-Graham proposal.

His gambit worked. By Friday, the bill appeared to be DOA after Sen. John McCain said he would not support it and Kimmel was celebrating the victory on Twitter.

And fans were taking to social media to thank Kimmel, his wife (and head writer) Molly McNearney as well as McCain for advocating on their behalf.

Thank you Billy (and Jimmy) and Sen McCain for helping all of us kids with pre-existing conditions in this fight! pic.twitter.com/NEuQHr9AgN

Thank you @jimmykimmel !! my twins needed NICU. bill was over $500k. would've bankrupted us if not 4 ins. Everyone deserves healthcare

Savannah thanks you too! pic.twitter.com/rlMqcJYwRo

The move into the political spotlight was a radical shift for Kimmel who until this past week continued to do what worked for him over the last 13 years of “Jimmy Kimmel Live!”

As other late-night shows from NBC’s Seth Meyers to CBS’ Stephen Colbert to Comedy Central’s Samantha Bee worked themselves into a frenzy railing against the president and his administration, Kimmel maintained his comic persona of the guy watching from the sidelines, laughing at everyone for taking everything so seriously.

He was part of an older tradition of late-night TV talk hosts who avoided politics to avoid alienating viewers or because they didn’t feel comfortable striking that sort of pose.

When he commented on the day’s news, Kimmel did so with cutting sarcasm, always tempered by a knowing grin and aloof disengagement. He made fun of the new president, just like he made fun of the last president. Viewers knew Kimmel as the guy who made fun of everything, and they let him get away with it because he never really seemed to care about anything.

And then came  the health care debate. Kimmel first grabbed people’s attention with a tearful monologue in May about his newborn son, Billy. Revealing that Billy suffered from a heart condition requiring multiple surgeries and a lifetime of care, Kimmel delivered an uncharacteristically heartfelt plea to protect Americans’ access to health insurance.

“If your baby is going to die and it doesn’t have to, it shouldn’t matter how much money you make,” he said. “I think that’s something that whether you’re a Republican or a Democrat or something else, we all agree on that, right?”

The experience of becoming a father seemed to flip something inside the comedian. The week after the story about his son, Kimmel interviewed Cassidy on his show and got the senator to agree to hold any Republican health care bill accountable to the “Jimmy Kimmel test,” defined by the standard that “no family should be denied medical care, emergency or otherwise, because they can’t afford it.”

Gone was the coolly detached snark, and in its place was honest emotion and a sincere attempt to engage in the political debate over health care. It was an entirely different Kimmel than viewers had seen before.

Indeed, it’s telling that the entire time Kimmel was addressing the health care issue, he swore up and down that he’d rather just go back to making jokes.

“I never thought I’d get involved in something like this,” he said on Tuesday’s show. “This is not my area of expertise. My area of expertise is eating pizza, and that’s about it. But we can’t keep letting them do this to our children, our senior citizens, our veterans, or to any of us.”

But regardless of what else he’d rather talk about, Kimmel was drawn back to health care time and time again. When politicians and pundits appeared on cable news to discuss the bill and its opposition, Kimmel’s name was the one that came out of their mouths.

He was repeatedly told to stay in his lane and leave the policy debate to the experts, but a Daily Beast report on Saturday revealed the comedian had been in touch with politicians and health care experts, including Democratic Senate Minority Leader Chuck Schumer, the entire time. Kimmel had inadvertently become the most public face in the fight against the Cassidy-Graham bill.

All this because Cassidy seemed to have underestimated Kimmel’s commitment to the issue when he set the “Jimmy Kimmel test” standard for himself back in May. The bill the senator put his name on didn’t pass the test, and Kimmel felt like he’d been lied to.

“Bill Cassidy named this test after me,” Kimmel pointed out in one of his monologues. “Am I just supposed to be quiet about that?”

The personal connection has not been lost on viewers. “[Kimmel’s] stance is coming from a very personal and empathetic position — he is reacting as a father to a sick child, which is apolitical and highly relatable,” Mittell said. “His plea is self-effacing: His son should not have survived only because his father is rich. So any parent — or caring human being! — can empathize with Kimmel, while the other side of the debate is heartless and cruel.”

Scheft noted that the story may have started local, but its impact quickly grew. “It started as a personal story and plea — it escalated because he took what a politician said personally. That’s what made it so compelling,” he said. “Then, as a performer with a nightly platform, it became practical for him to hammer this nightly. And it has the added bonus of urgency, which is something you dream about having every night. That he has made it funny is not a surprise. Unlike a joke, he has a giant investment.”

That the feeling of personal investment was so out of character for Kimmel only made his case more compelling. People took him seriously because his earnestness was such a huge deviation from the sardonic TV personality they’d come to know.

“Viewers believed Kimmel when he said this was personal to him because they know he isn’t the type to speak to every political issue,” said Jason Zinoman, author of “Letterman: The Last Giant of Late Night” and late-night columnist at the New York Times. “But we can also over-analyze these things. Quite simply, he delivered eloquent, informed, heartfelt monologues, and that’s why they had an impact more than any other reason.”

But where does Kimmel go from here? Does his success in affecting policy mean his show will become more overtly political going forward?

Reps for Kimmel and his show have not responded to TheWrap’s request for comment. But if the last week has proven anything, it’s that Kimmel is not afraid to use his platform to fight for an issue he feels strongly about.

It remains to be seen whether Kimmel will be able to capitalize on that in a highly competitive late-night landscape where Kimmel regularly falls in the ratings behind competitors Jimmy Fallon and Stephen Colbert, but his show enters the new week with an enormous amount of buzz.

Also Read: Senator Who Called for 'Jimmy Kimmel Test' to Appear on His Show

“This week, ‘SNL’ wins nine Emmys, and Stephen Colbert hosts the Emmys,” Thompson said. “But everyone is talking about Jimmy Kimmel.”

Even if all of this was just an one-time deviation and “Jimmy Kimmel Live!” goes back to business as usual, Kimmel has assured that the next time he does venture into a political debate, people are going to take him a lot more seriously.

Tony Maglio and Ryan Gajewski contributed to this report.

The 2017 Emmy Awards were full of highs and lows on Sunday night. From host's Stephen Colbert's opening monologue to the final award of the night, here are the show's best and worst moments.