There may have been several new big developments in the world of Donald Trump on Tuesday, but late night hosts all directed the bulk of their jokes at the same one: Trump announcing that the U.S. would pull out of the Iran nuclear deal. Jimmy Kimmel was no exception, devoting a large portion of his opening monologue on “Jimmy Kimmel Live” Tuesday night to exactly that.

“He is so pleased with himself, pulling out of Obama’s deal,” Kimmel said. “The one time Trump should have pulled out, we ended up with Donald Jr. And now watching Donald Trump give this speech today was nothing short of fascinating.”

Kimmel then played a clip from Trump’s big announcement in which he mentioned that Mike Pompeo is heading to North Korea ahead of Trump’s meeting with Kim Jong-un — and Trump again pronounced “Kim Jong-un” in that strange halting way, pausing between each syllable, that drew everybody’s laughter a while back.

Also Read: Colbert Goes Off on Trump Over Iran Nuclear Deal: 'You Literally Just Backed Out of an American Promise' (Video)

“I feel like he’s learning to read before our very eyes,” Kimmel joked. “But when he makes promises he keeps them. Just ask any of the women Michael Cohen paid off.”

After that brief non-sequitur, Kimmel got back on track.

“Trump says that the Iran deal is a horrible, one-sided deal and never should have been made. I bet anything he hasn’t read one word of that deal, he knows none of the details,” Kimmel said. “This is not a popular decision. Lawmakers from both parties spoke out against this. The British prime minister and French president said they regretted Trump’s choice. Even Russia said they were disappointed, though that is a lie — they love it. Trump said he will reimpose sanctions on Iran and, as a result, Iran says they will immediately resume enriching uranium. But Trump says if Iran doesn’t fall in line, look out.”

“Jimmy Kimmel Live” then played a clip of Trump declaring that “if the regime continues its nuclear aspirations it will have bigger problems than it has ever had before.”

Also Read: Seth Meyers Thinks It's Hilarious That Trump Tried to Claim That He Keeps His Promises (Video)

“That’s right, don’t test him, Iran. He will turn your whole country into a poorly run casino like that,” Kimmel said, snapping his fingers.

“Meanwhile, the president’s legal team will decide next week whether or not he should testify before special counsel Robert Mueller,” Kimmel continued, moving on to new topics. “Trump is in a tough spot because he could sit down with Robert Mueller and get caught in a lie. Or even worse, he could sit down with Mueller and get caught in the truth, which would be devastating.”

Kimmel then discussed another popular late night topic on Tuesday: the report that Trump’s legal team tried to put him through a testimony prep session and it didn’t go well.

Also Read: Jimmy Kimmel: Rudy Giuliani's Job Is to Be 'Even Nuttier Than Trump' (Video)

“The Wall Street Journal reports that Trump’s lawyers put him through a four-hour practice session — they were only able to get through two questions in four hours,” Kimmel said before starting in a joke about Trump having dementia. “He’s like that old lady from ‘The Notebook.’ ‘Okay, first thing’s first, your name is Donald Trump and you’re president of the United States. Go.’ So Trump’s lawyers requested that he be able to answer the special counsel’s questions in writing instead of in person. Robert Mueller said no. That makes sense. Look at this guy’s handwriting. They’d have to bring in a cardiologist to translate it for them.”

Kimmel then displayed this image of Trump holding up a signed document. 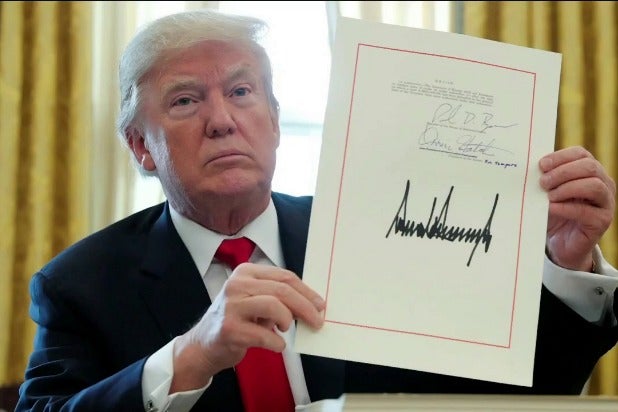 “It’s also interesting the president’s lawyers don’t trust him to answer questions, but they do trust him to be president. It makes no sense at all,” Kimmel quipped.

“The president is also said to be unhappy with his newest attorney, Rudy Giuliani, who’s been making a mess on cable and network news. Trump is reportedly irritated and disappointed by the interviews Giuliani has been giving. He’s like, ‘Look I’ll say the crazy stuff, you stick to pretending it isn’t crazy.’ Can you imagine being so rambling, incoherent and contradictory that even Donald Trump is like, ‘You’re embarrassing me.’ They say he may even ban Giuliani from doing any more interviews. Which, I hope not. This would be like when they killed Mr. Eko off on ‘Lost.’ It’s too soon.”

Kimmel also got another news item that is hard to believe is all the way down here on the priority list. But, hey, welcome to 2018.

“And on top of all that, Stormy Daniels attorney, Michael Avenatti, today presented evidence that a Russian oligarch paid Trump’s personal attorney Michael Cohen $500,000, and Stormy herself did an interview with Penthouse magazine that came out today in which she said, among many things, that after sex Trump’s hair looks like a drunken cockatoo,” Kimmel said. “And I’ll tell you something — this is a woman who seen a drunken cockatoo.”

Also Read: Seth Meyers: 'Trump and His Inner Circle Are Serial Habitual Liars. They Lie Constantly and They Do It on Purpose' (Video)

That last line there is a pun. If you think about it for a moment, it’ll come to you. If you’re having trouble, turn the “a” in “cockatoo” into “or.”

You can watch Tuesday’s episode of “Jimmy Kimmel Live” in full on ABC.com right here.