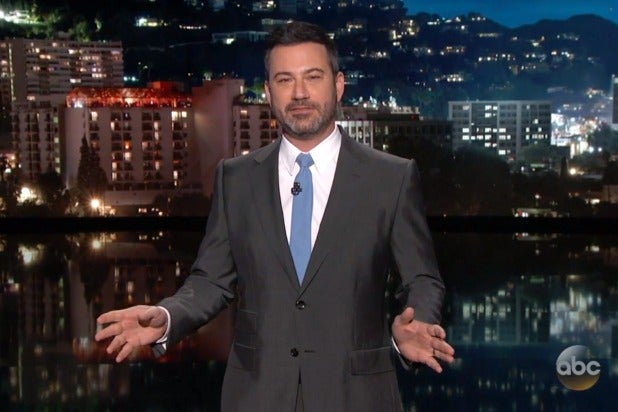 Among the many hilarious-yet-also-depressing Donald Trump-related news items on Tuesday, there was one that every late night host, including Jimmy Kimmel, hit last night: that whole thing where the list of questions Robert Mueller wants to ask Donald Trump got leaked to the press.

“The president had another day of tumult. The failing New York Times somehow got a copy of the questions special counsel Robert Mueller wants to ask the president. These are questions Mueller’s office provided to Team Trump, who probably turned around and leaked to the Times themselves.” Kimmel said.

“This is funny — the reason they think it was Trump’s people who leaked the questions is because they’re riddled with grammatical errors. Which is one of the hallmarks of this administration.”

Then Kimmel had some quips about Trump’s much-beloved tweet from Tuesday morning. You know the one I’m talking about.

“But Trump played his role well today. He wrote, ‘So disgraceful that the questions concerning the Russian Witch Hunt were ‘leaked’ to the media. No questions on Collusion. Oh, I see…you have a made up, phony crime, Collusion, that never existed, and an investigation begun with illegally leaked classified information. Nice!’ ” Kimmel read. “I like ‘nice!’ That’s what my mother used to yell at me. ‘Oh, you leave your clothes all over the floor and now you’re going out to have fun. Nice!’ At this point, our only hope is that he accidentally spirals into control.”

Kimmel then discussed the questions themselves, focusing on four which he found most compelling.

“There are 49 questions on a range of subjects the special counsel wants to get to the bottom of, and I won’t go through all of them, but here are the four key questions Mueller wants to ask,” Kimmel said. “Number 1: ‘Have you ever discussed terminating the special counsel?’ Number 2: ‘Did you know of any attempt by Jared Kushner to set up a back channel to Russia?’ Number 3: ‘What happened during your 2013 trip to Moscow for the Miss Universe pageant?’ Number 4: ‘What the F is on your head already?’ “

That last one, obviously, was one Kimmel added for comedy purposes.

“I really would pay almost any amount of money to see Trump answer Robert Mueller’s questions live on television. It would get the biggest ratings in history,” Kimmel said as he wrapped up this thread.

Also Read: Seth Meyers: Michelle Wolf 'Is Filthy' and 'Mean, Which Is What We Love About Her' (Video)

“The Super Bowl would be nothing. We wouldn’t need Mexico to pay for the wall. We could get pay-per-view to pay for it.”

You can watch Tuesday’s episode of “Jimmy Kimmel Live in full over at ABC.com right here.