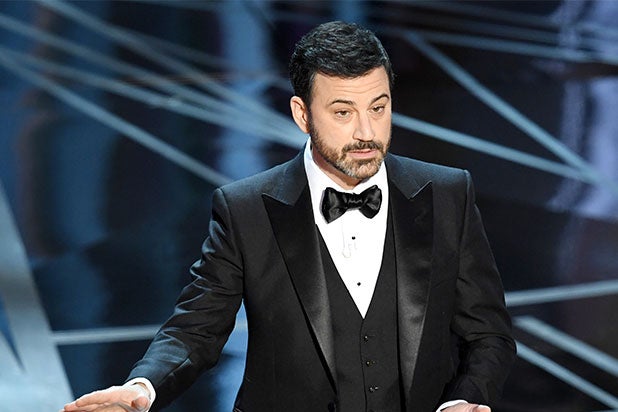 Jimmy Kimmel’s tour bus skit has gotten him a whole lot of praise. But the Oscar host is also getting some blowback for mocking an Asian woman’s name during the Sunday’s movie awards ceremony.

Kimmel invited a bunch of unknowing tourists into the Dolby Theatre, who were star struck at the many famous faces they were seeing. When Kimmel asked an Asian woman for her name, she told him her name was Yulree, which rhymes with “jewelry.”

Kimmel responded, “your name is Yulree? I know it rhymes with jewelry! That’s some name!” Then, he asked her husband what his name was, to which he responded, “Patrick.”

However, some people on Twitter took offense and also threw Mahershala Ali’s name into the mix, which Kimmel mentioned a few times throughout the night.

“It’s not the #Oscars unless they make fun of Asians somehow. This time, it’s Yulree’s name. Not really laughing,” wrote one user.

See Video: Jimmy Kimmel Teases 'Overrated' Meryl Streep: 'She Has Phoned It In'

“Names like Mahershala and Yulree confuse @jimmykimmel. He prefers a real name like Patrick. And I thought the #Oscars weren’t racist anymore,” wrote another.

A representative for Kimmel has not yet responded to TheWrap’s request for comment.

See reactions to Kimmel’s skit below.

It's not the #Oscars unless they make fun of Asians somehow. This time, it's Yulree's name. Not really laughing @jimmykimmel. #OscarsSoWhite

Fuck you @jimmykimmel for deciding Yulree ain't a name. Fuck you and your white-normative shit-filled peabrain.

Names like Mahershala and Yulree confuse @jimmykimmel. He prefers a real name like Patrick. And I thought the #Oscars weren't racist anymore

@kevinmax the Patrick bit was not gold. Makes people feel like the "other". Anglo name okay. Asian name (Yulree Chun) not okay.

Justin Timberlake opened the 2017 Academy Awards singing his Oscar-nominated hit single from "Trolls," "Can't Stop the Feeling." After taking the stage with backup dancers for the number, Timberlake headed into the crowd of huge movie stars to get everyone on their feet. Some actors get very into the song. A few looked like audience members at a magic show, hoping they wouldn't get called on.