Several weeks ago, Tucker Carlson gave a speech at a right wing mega church in San Diego, California, where he claimed that he has never been vaccinated against COVID-19. But Jimmy Kimmel thinks he’s straight up lying about that.

So the thing is, Carlson has refused for months to answer the question publicly one way or the other, though he has ginned up anger against even tepid COVID-19 safety measures, even as U.S. deaths were skyrocketing. So, after months of refusing to confirm one way or the other, he quietly told the crowd of evangelical Christians that he isn’t.

Perhaps that’s why Kimmel said during his Tuesday monologue that he thinks Tucker is lying. 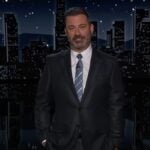 “So, the other darling of Fox News, Tucker Carlson, made an interesting confession at a Mega Church in San Diego. He said he is not vaccinated. He said he wanted to get vaccinated, but every time he tried, a caravan of migrants blocked him from the entrance to the CVS,” Kimmel joked.

“I have to say, I don’t believe he isn’t vaccinated. I don’t believe it for a second. I think he is vaccinated. Tucker Carlson is the vaccine equivalent of the guy on the Titanic who dressed as a woman to get on the lifeboat first,” Kimmel continued.

“The sickest part is his audience is mostly a scared and impressionable [group of] senior citizens who happen to be the most vulnerable group when it comes to COVID. This is like selling Girl Scout cookies outside a diabetes clinic,” Kimmel said as he brought the bit to a conclusion. “But I’m glad to see the church welcoming prostitutes, as Jesus taught us to do. Especially during this holy week.”

Watch the whole monologue above. The Tucker Carlson stuff begins just after the 8-minute mark.