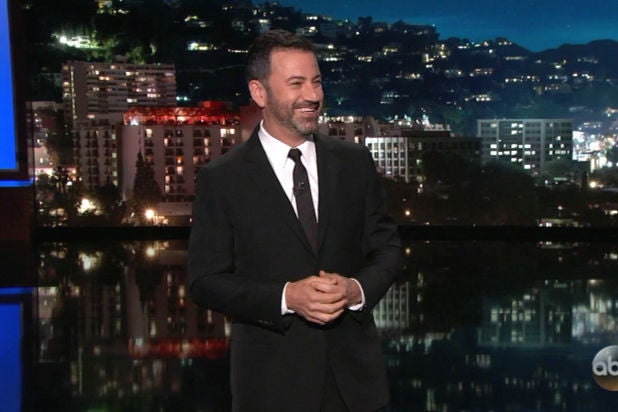 Donald Trump may be embroiled in all sorts of scandals, but he had at least one reason to be in a good mood on Thursday — it was his 72nd birthday. In honor of it, Jimmy Kimmel opened his show Thursday night by making jokes about it.

“Thank you for joining us on a very special day here in the United States of America. 72 years ago today, in the borough of Queens, in the state of New York, a pumpkin got trapped in a tanning bed and Donald J. Trump was born,” Kimmel joked. “Today is President Trump’s birthday. They gave him a Carvel ice cream cake. He grabbed it right by the Cookie Puss.”

In case you’re wondering, Cookie Puss is a Carvel mascot of sorts. The rest of the joke you almost certainly get.

“The Vice President is the one who actually gets the cake for birthdays,” Kimmel continued. “He is in charge of making sure that all cakes that come into the White House were baked by heterosexuals. It’s his most important duty.”

Then Kimmel fired off some jokes about Trump’s marriage — in particular when Melania disappeared from the public eye for a few weeks.

“The first lady, Melania Trump — I thought this was interesting. Last year she wished her husband a happy birthday on Twitter. She posted this: ‘Happy Birthday Mr. President’ with heart emojis,” Kimmel said.

“So this year she posted nothing. Gee, I wonder why that is? She did give him a card, this is the card. ‘Happy birthday.’ It says, ‘You’ll never find me.'”

Kimmel is referring here to a physical card which he was holding. Here’s a shot of it: 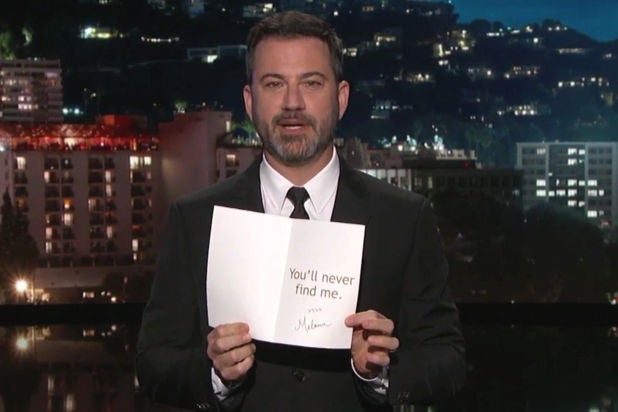 “You know true love means never having to be in the same room together. So happy birthday, Mr. President,” Kimmel said as he ended this thread. “By the way, this is the day Mueller should’ve served the subpoena. Right? On his birthday? Maybe with a candle on it?”

Also Read: Kimmel Applauds Trump: 'It's Amazing What You Can Accomplish When You Just Make Stuff Up'

You can watch Thursday’s episode of “Jimmy Kimmel Live” on ABC.com here or on the ABC app.