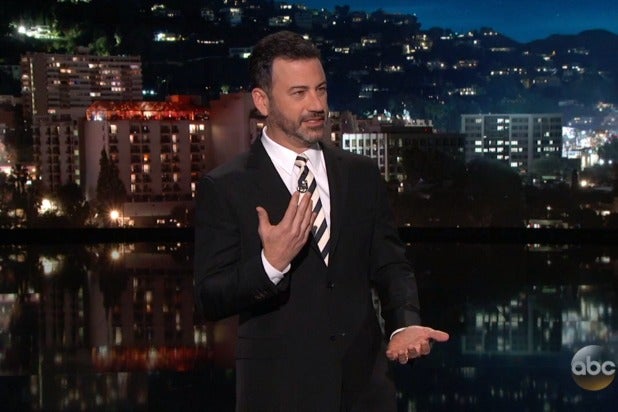 The story of Trump lawyer Michael Cohen is sticking with us for the duration, and Jimmy Kimmel had some interesting thoughts about the latest development: that some folks in Donald Trump’s inner circle are apparently worried that Cohen, in the wake of the FBI raid on his office and home last week, will seek a deal with investigators and spill the beans on Donald Trump.

“The bigliest concern for Team Trump right now — the story that is reportedly driving him to the edge — is whether or not his personal lawyer Michael Cohen is going to ‘flip’ on him. Cohen has been under federal investigation for months, and many of Trump’s closest friends and advisers are worried that he’ll make a deal to tell federal prosecutors everything he knows,” Kimmel said.

“One of the President’s former lawyers told Trump that, on a scale of one to 100, where 100 represents full protection of the president, Cohen ‘isn’t even at a 1.’ Which, I don’t know about that. I mean, Does this look like the face of someone who is going to crack under pressure from federal investigators? I don’t think so. He looks like a dog that got caught peeing on the rug. But who knows. Michael Cohen once said he’d take a bullet for Donald Trump. And Robert Mueller was like, ‘Oh, great! Stand right there. You want a cigarette or anything?’ “

Kimmel then expressed a pretty keen observation about the whole thing: that their concern over whether Cohen will flip sure makes it seem like Trump must be guilty of something.

“Trump confidantes are openly concerned that Cohen might flip. Which, I think that alone is interesting? I mean, if he isn’t guilty of anything, why does it matter if he flips? Flip away! Flip like an acrobat!” Kimmel joked.

That aside, Kimmel also wondered why anything would think somebody would stay loyal to Trump.

Also Read: Jimmy Kimmel: Trump Loves Giving Thumbs Up Because His 'Thumb Is the Only Normal-Sized Finger on His Hand'

“But here’s the thing — almost no one is loyal to Donald Trump, because Donald Trump isn’t loyal to them. He cheats in business, he cheats in golf, he cheats in marriage. He definitely cheats on his taxes, that’s why we haven’t seen them,” Kimmel said. “He throws everybody who works for him under the bus eventually. ‘Loyalty’ to Donald Trump means, ‘You scratch my back, and then we’re done.’ “

Kimmel then played a clip of a reporter asking Trump about the situation, to which Trump responded by talking about something else entirely.

“Thank you, everybody. I hope you saw the crowds in key west. they’ve never seen anything like that. It was really very inspirational. And what we just witnessed was incredible. Those crowds coming in, I think even the media will have to say that was quite something,” Trump said in the clip.

“That was quite something, he ignored the question,” Kimmel said. “And went into yet another monologue about how big his crowds were. Someday, I feel like he’ll be in prison going, ‘You should have seen them, all the way back to the edge, they were chanting my name.’ “

You can watch all of Thursday’s episode of “Jimmy Kimmel Live” on ABC.com right here.