Jimmy Kimmel made note of one of Donald Trump’s more fascinating tics during his “Jimmy Kimmel Live!” monologue Wednesday night when he was discussing Trump’s meeting this week with Japanese Prime Minister Shinzo Abe, Trump’s propensity for giving a thumbs-up sign in photos, and how very often everyone else in the photo with him also gives a thumbs up sign.

“Speaking of nuts, President Trump is at Mar-a-Lago this week to meet-slash-golf with the prime minister of Japan, Shinzo Abe. It was his 108th day on the golf course since taking office. But he wants to make it very clear they’re there to work. In fact, he tweeted, ‘Prime Minister Abe Shinzo of Japan and myself this morning building an even deeper and better relationship while playing a quick round of golf at Trump International Golf Club.’ A quick round of golf and a plug for my golf course,” Kimmel joked, before taking a closer look at the picture that was attached to the tweet.

“Look at this photo. Zoom into this. I stared at this for four full minutes today. Look at these two. They’re all dressed up in their golf outfits. Trump gives that dopey thumb up that he always gives,” Kimmel said, as this image displayed on screen: 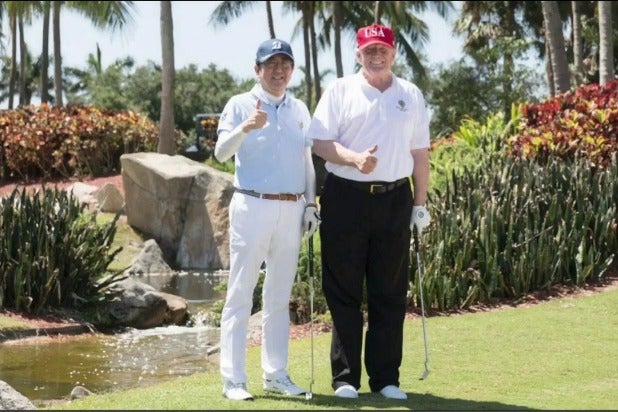 “Donald Trump loves giving the thumb up in pictures, making everyone else feel like they have to do it too. And they do do it,” Kimmel said, as he began listing off a series of situations in which Trump gave a thumbs up and whoever else was in the picture also gave the thumbs up. “Here he is with the Republican leadership at dinner last week.” 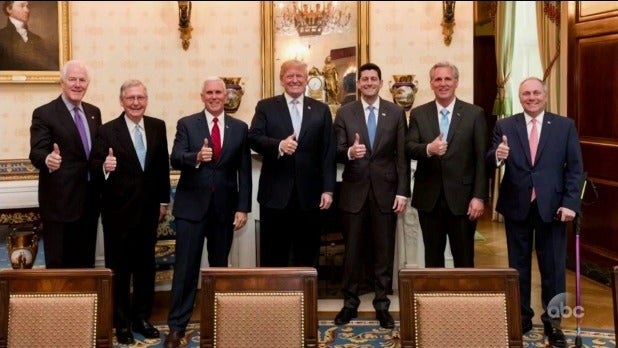 “This is the staff on Air Force One.” 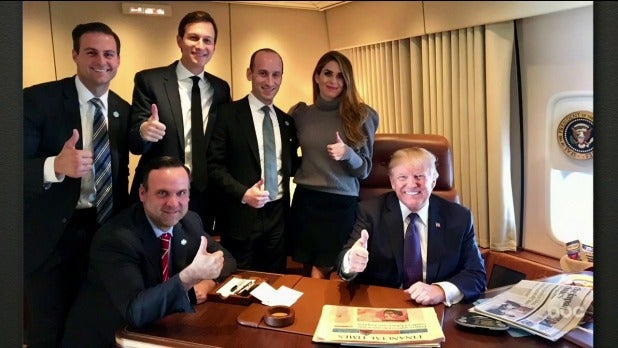 “This is last month with the Saudi prince.” 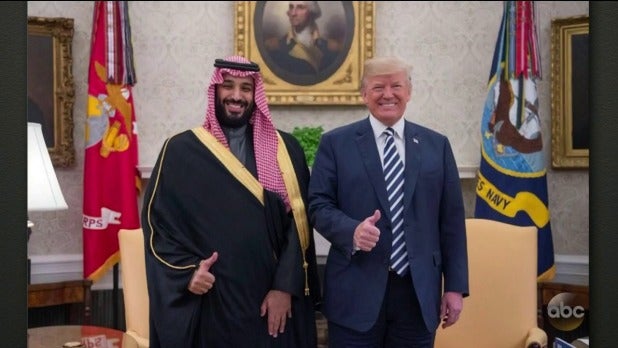 Kimmel then took a shot at another thing that Trump did during Prime Minister Abe’s visit.

“So after the golf thing and thumbing, the president and Prime Minister Abe held a joint press conference at which Trump spoke both fondly and oddly about his November visit to Japan,” Kimmel said, before a clip played in which Trump made the following comment:

“It was a true privilege to be welcomed to the magnificent land of Japan, or as I’ve heard all my life, the land of the rising sun. It’s true. So great.”

“So great. Even greater than you realize. You know he only knows that from the Wesley Snipes movie, right?” Kimmel quipped, referring to the 1993 crime drama “Rising Sun,” which starred Snipes and Sean Connery.

Kimmel also had some shots to take an another key Republican figure in the U.S. government: Sen. Mitch McConnell.

“With all that’s going on right now, lawmakers in the House and Senate are concerned that Trump might actually fire Robert Mueller and all hell will break loose. So they’re working on bipartisan legislation that would protect the special counsel from the president,” Kimmel said. “Republicans Lindsey Graham and Thom Tillis are trying to push this through. Senate Majority Leader Mitch McConnell says he won’t allow a vote on it. McConnell was on Fox News yesterday and Neil Cavuto asked if there was a need for legislation to prevent the president from firing the guy in charge of investigating him.”

Then a clip played from that interview, in which McConnell made this comment: “That’s not necessary. There’s no indication that Mueller’s going to be fired. I don’t think the president’s going to do that.”

Kimmel, of course, thought that’s an odd stance given, well, the entire history of Donald Trump.

“You don’t? Everybody else does. Why do they want to introduce legislation? Listen, his catch phrase, before he was even president, his catch phrase was, ‘you’re fired.’ No chance he might fire the guy? He’s already tried to fire him twice but his people talked him out of it,” Kimmel said, before slapping McConnell with a joke about how he looks like a turtle. “But Mitch McConnell doesn’t think it’s necessary. The only time Mitch McConnell ever sticks his neck out is to slowly eat a piece of lettuce.”

You can watch all of Wednesday’s episode of “Jimmy Kimmel Live on ABC.com right here.