“Now that Elon Musk is buying Twitter, Trump finds himself in a very Trumpy situation because he raised more than a billion dollars to start this promising new right-wing media platform that looks exactly like Twitter,” Kimmel said during his Tuesday night monologue. “But now that he probably won’t be banned from Twitter anymore because Elon owns it, he’s kind of stuck.”

Kimmel went on to call Truth Social “a disaster” (a word often employed by the former president), and noted Trump “hasn’t even posted on it for 11 weeks.”

Although the former president has said he won’t return to Twitter, Kimmel believes the former “Apprentice” boss will revisit the platform if Musk allows him back on (Trump was banned permanently following the events of Jan. 6). 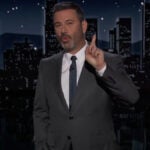 “He claims he won’t go back on Twitter, but he 100% will go back on Twitter and then this dumb new company he conned everybody out of their money for will become, I guess the social media equivalent of a RadioShack. A RadioShack that is run by Devin Nunes,” Kimmel joked, referring to electronics store that closed its brick-and-mortar shops due to bankruptcy.

As Kimmel continued his bit, he took some digs at former congressman Nunes, who is CEO of Truth Social.

“But Trump, who knows all the best people, hired Devin Nunes, who as far as I know was a cow milker before he ran for Congress, to run this thing which he is doing so poorly even the apple polishers at ‘Fox and Friends’ are complaining about it,” Kimmel said, cutting to a clip where host Steve Doocy said he remained on the waitlist for Truth Social. 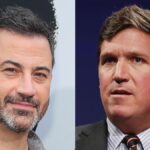