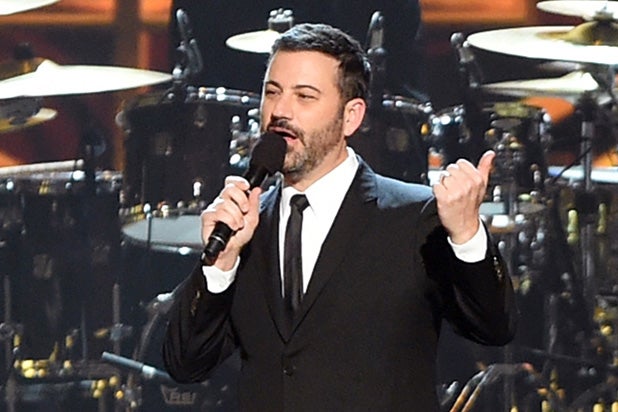 Jimmy Kimmel pulled no punches during his time on stage at ABC’s upfront event on Tuesday, taking aim at the other networks, former ABC president Paul Lee, and the growing trend among the broadcast nets toward bucking live ratings.

He even made fun of his own network’s shows, including last year’s failure “Wicked City” and the upcoming comedy “Downward Dog.”

Here are some of the best zingers from his set:

“[Upfronts are like] a TED Talk where you leave dumber than when you got here.”

“ABC has become like a family to me, and this is like our family reunion every year. Where’s Uncle Paul?” (Referencing former ABC Entertainment president Paul Lee.)

“How are you guys holding up. Was it a long day yesterday? F–king NBC. Did they mention they have the Olympics?”

“The other networks are horribly racist … That’s why I’m so excited to introduce ‘Gay, Black Doctor Cop.”

“One alarming trend is that millennials are leaving our networks in droves. And I guess this is a problem, but are we really going to let these vaping, Snapchatting, music-stealing little f–kers determine how we do business?”

“Eighteen-to-49 isn’t just our target demo, it’s the number of people who watched ‘Wicked City’ last year.” (ABC pulled the plug on the freshman series back in November after just three episodes.)

“Yesterday Fox said their audience is younger and their content is buzzier. And I will add that their bull is sh-ttier … All your favorite VHS tapes are becoming series.”

“The average CBS viewer looks like the Red Woman from “Game of Thrones” without her necklace on.”

“Should a guy who knocked up his maid be put in charge of an apprenticeship program? I think not.”

And, finally, referring to the new contract Kimmel signed earlier in the day:

“I’ll see you next year. And from what I’m told the next two years after that.”