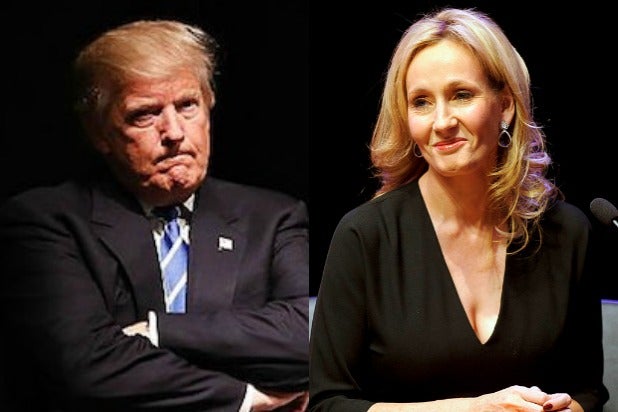 There certainly is no love lost between President Donald Trump and J.K. Rowling, as was once again proven by the “Harry Potter” author’s Saturday tweet over the debate about NFL players kneeling during the national anthem in protest over police brutality.

Rowling’s button was pushed when the POTUS tweeted that football players who have the “privilege of making millions of dollars in the NFL” should not be allowed to sit out the anthem. Rowling tossed Trump’s words right back in his face.

“‘Privilege.’ Some people don’t get given millions by Daddy, Donnie. They actually earn it,” she shot back.

'Privilege.' Some people don't get given millions by Daddy, Donnie. They actually earn it. https://t.co/rmKataLLQX

Trump has come under fire since Friday night when he told the crowd at a rally for Alabama Senate candidate Luther Strange, “Wouldn’t you love to see one of these NFL owners, when somebody disrespects our flag,  to say ‘get that son of a b–h off the field’ right now, out! He’s fired?'”

When athletes, team owners and football fans expressed their anger over his comments, Saturday afternoon Trump doubled-down by tweeting, “If a player wants the privilege of making millions of dollars in the NFL,or other leagues, he or she should not be allowed to disrespect….our Great American Flag (or Country) and should stand for the National Anthem. If not, YOU’RE FIRED. Find something else to do!”

That’s when Rowling spoke up. But this was, by no means, the first time Rowling has expressed her dislike for Trump.

There was the time almost two years ago when she said “Voldemort was nowhere near as bad” as the then-presidential candidate. Or when she took aim at “fascist” Trump, adding, “God help us all.” Or even the time she went the passive-aggressive route after he made comments about “Morning Joe” co-host Mika Brzezinski “bleeding badly from a face lift” by tweeting him the Abraham Lincoln quote “Nearly all men can stand adversity, but if you want to test a man’s character, give him power.”

If history continues to repeat itself, we’ll be hearing from Rowling again in the future.