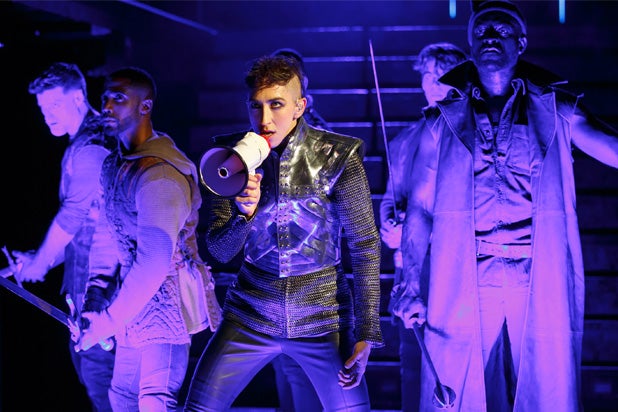 It’s clear that David Byrne and Bill Maher (“Religulous”) disagree when it comes to God. On the subject of Christianity’s top butch female warrior, Byrne turns out to be a true believer. At least that’s the impression given by his new musical, “Joan of Arc: Into the Fire,” which opened Wednesday at the Public Theater.

Writing the book, music, and lyrics, Byrne frames this familiar tale with two medical inspections of Joan’s hymen, to see if it’s intact. Back in the 15th century, only virgins could hear the voices of angels. If Joan (Jo Lampert) isn’t a virgin, then she’s most definitely a liar about all those heavenly conversations she’s been having. Byrne, surprisingly, concentrates on questions of whether or not Joan is a virgin, as opposed to whether or not she’s nuts.

These two vaginal inspections are not repetitious. The first is conducted by the French, and Joan not only passes the test with flying colors, she endures it with less trauma than your standard airport-security pat-down. Apparently, the French know how to handle these things.

When the English give Joan the once over, it turns into a long, grizzly ordeal of pain and humiliation, as choreographed by Steven Hoggett under Alex Timbers’ direction. Joan is still a virgin, but she’s now a sadder, wiser, and more vengeful warrior.

Byrne is very direct in his storytelling: English bad, French good and persecuted. Byrne has little to say about Joan of Arc other than that she’s into nationalism and war. That message is bolstered by the direction, choreography, lighting design (Justine Townsend), and set design (Christopher Barreca), all of which tend toward the monumental — something that a Mussolini or Franco would admire.

Byrne has a nice talent for plaintive soft-rock ballads. Mare Winningham makes a cameo appearance at the end, playing Joan’s mother and singing “Send Her to Heaven,” the show’s breakout hit. Otherwise, when Byrne goes big with his music, he enters “Les Miz” territory, and his lyrics turn jingoistic.

It’s odd in 2017 to have a play or musical about Joan of Arc that doesn’t directly reference the saint’s status as a gender-bender. Lampert certainly plays her as butch. But even with her shaved head and unshaved armpits, she bears an uncanny resemblance to Margaret Hamilton, who played the Wicked Witch in the original “Wizard of Oz.” And Lampert often plays Joan more as bad witch than good saint. That interpretation gives “Joan of Arc: Into the Fire” its few sparks of controversy.