For his role in the drama “Jockey,” actor Clifton Collins Jr. did everything he could to live the part, trying to blend in with other jockeys and learning the tricks of the trade. But his experience on the racetrack goes way back to when he was a kid.

Collins Jr. spoke with TheWrap’s Beatrice Verhoeven at the Toronto International Film Festival and recalled being brought to the racetrack by his father as a boy and at a young age learning how to bet on horses. Though, he explained, that those memories weren’t always great ones.

“My parents separated when I was young, so the few times that we had visitation with him, picking up myself and my sister as children would be at the racetrack across the street from the trailer park he lived in,” Collins Jr. said. “So I learned to bet on the horses when I was 9. He would be drinking while I was learning to do the stats and numbers.” 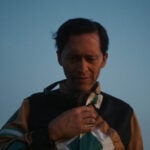 That backstory has some similarities to the narrative of “Jockey,” which is about an aging jockey with one last shot at glory, who suddenly comes into contact with a young athlete (Moises Arias) claiming to be his son.

Collins Jr. said that in training for the part, he wanted to do anything he could to help his jockey mentors out, be it carrying saddles, cleaning gear or staying with the horses.

“I spent almost every day with the jockeys. But I wanted the actor-y, whatever their perception is of me to just go away. So I was in service to them whatever they needed,” he said. “It was very easy for me to have enough anonymity and by, like, Day 3 to just blend in…I just want to be one of the guys. I just want to fit in.”

And Collins Jr. is one of the few people in director Clint Bentley’s film that was actually a trained actor, with many of the performers coming straight from the world of horse racing. Bentley described them as “people you would never find in casting sessions” and that he was inspired by European cinema in which you can’t always tell who is an actor and who isn’t.

“There’s a reason he disappears into the role is because he does the work to become that character,” Bentley said. “Whatever situation you put them in, some magic comes out of it.”

“Jockey” first premiered at Sundance earlier this year and is screening as part of this year’s TIFF. Check out TheWrap’s full video interview between Clint Bentley and Clifton Collins Jr. above.