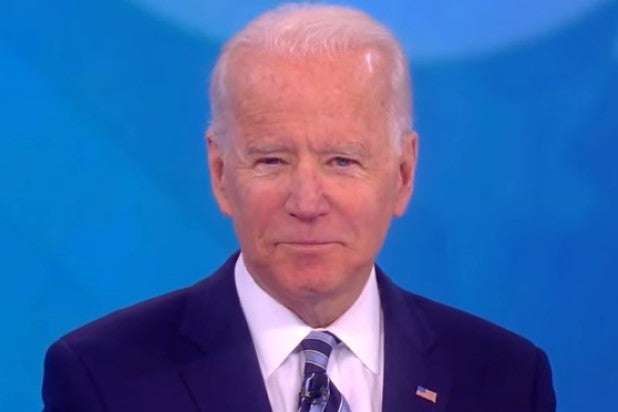 During his appearance on Thursday’s episode of “The View,” Joe Biden responded to comments made by conservative radio host Rush Limbaugh about Pete Buttigieg, saying that Buttigieg has “courage” and is “smart as hell.”

On Wednesday, Limbaugh questioned Buttigieg’s electability on his radio show, describing the former Indiana mayor as “a 37-year-old gay guy kissing his husband on stage, next to Mr. Man, Donald Trump.”

“What’s going to happen there?” Limbaugh postulated. He then prompted his audience to imagine Trump having “fun with that” during a general election battle against Buttigieg.

Some, including “The View” host Joy Behar, felt Limbaugh’s “Mr. Man” comment was homophobic. During the Hot Topics section prior to Biden’s appearance, the panel reminded viewers that Buttigieg served in the military, while Limbaugh and Trump were disqualified from the draft due to medical reasons.

“Pete and I are competitors, but this guy has honor, he has courage, he’s smart as hell,” Biden said of his rival. Both men are seeking the Democratic nomination for president.

Limbaugh’s comments came one week after he was awarded the Presidential Medal of Freedom by Trump, the highest honor a civilian can be bestowed. Biden said the bestowment was “part of the depravity of this administration.”

“We get it,” Whoopi Goldberg assured the candidate as the panelists pivoted to another topic.

.@JoeBiden reacts to Rush Limbaugh questioning Pete Buttigieg’s electability because of his sexuality: “Pete and I are competitors, but this guy has honor, he has courage, he’s smart as hell.” https://t.co/f8u2wbJuik pic.twitter.com/1ohsu7Wdpu