President-elect Joe Biden delivered a passionate speech on Saturday night in his first address since being declared the projected winner of the 2020 presidential election.

“Folks, the people of this nation have spoken. They’ve delivered us a clear victory, a convincing victory, a victory for we the people. We won with the most votes ever cast for a presidential ticket in the history of the nation: 74 million,” the former vice president and senator said in a repudiation of President Donald Trump’s baseless claims that Biden won by cheating.

You can watch Biden’s speech above or click here.

Also Read: Barack Obama Congratulates His 'Friends' Biden and Harris: 'I Could Not Be Prouder'

He went on to speak directly to American educators, calling Saturday a “great day for” them, since his wife is a former teacher: “You’re going to have one of your own in the White House.”

Biden then explained who else was coming to the White House, saying that on Monday, he will form a task force to take on COVID-19 and advise his transition team so the fight against the pandemic can begin immediately.

Although he acknowledged the looming challenges having to do with the pandemic, the economy and unrest over systemic racism, he also pointed to more hopeful themes, saying, “We stand at an inflection point. We have an opportunity to defeat despair, to build a nation of prosperity and purpose. We can do it. I know we can.”

“It’s time for our better angels to prevail,” Biden added. “Tonight, the whole world is watching America and I believe at our best, America is a beacon for the globe. We will lead not only by the example of our power but by the power of our example.”

Vice President-elect Kamala Harris introduced Biden, saying, “When our very democracy was on the ballot in this election, with the very soul of America at stake and the world watching, you ushered in a new day for America.” 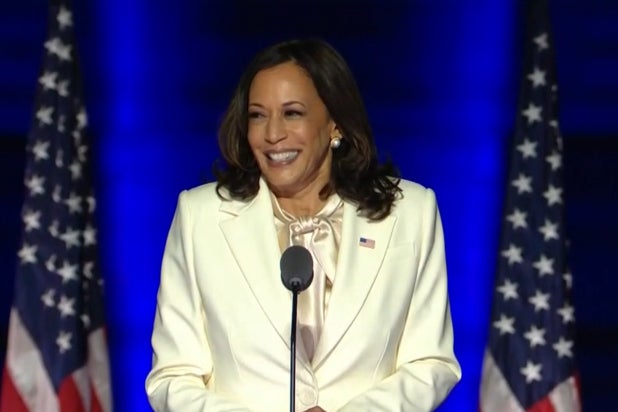 Harris thanked voters and campaign workers for protecting “the integrity of our democracy.”  She extolled voters and Joe Biden, then, too: “You chose hope and unity, decency, science, and — yes — truth.”

By Saturday evening, Trump still had not accepted the projected results and was vowing that the election was not over. He said he intended to pursue legal fights in key battleground states. One conservative opinion outlet, Newsmax, sided with Trump, refusing to call Biden the president-elect.

World leaders, domestic lawmakers and celebrities all rushed Saturday to send congratulations to Biden and Harris or post celebratory messages.