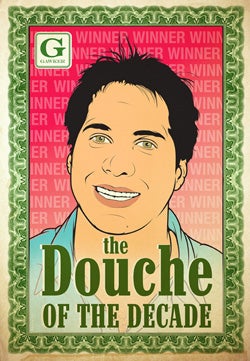 Francis faced some stiff competition for the dubious prize: Carrie Prejean, Bill O’Reilly and Joe Dolce, among others.

On Sunday, Francis fired off an e-mail to a vacationing Nick Denton (ccing his lawyers and Page Six editor Richard Johnson, among others) informing the Gawker founder of his intent to sue him over the dubious honor, specifically because the profile referred to Francis as a “rapist.”

I am suing you tomorrow personally.  You messed with the wrong guy. No one make up lies about me and gets away with it.  I lost a 10 million dollar deal as a direct result of you calling me “a rapist”. You will be paying me every dime of that back and more! Are you mentally retarded? Do your research first.   I am coming after you harder then I have ever went after anyone.  I am going to wipe you off the grid!!!!  YOU ARE DONE!    I will take everything you  have. You, Nick Denton, are truly the “Douche of the Decade”       Merry Xmas IDIOT!!!       Joe Francis     P.S. I sent you an updated picture of how I actually look now so you can masturbate to it because you seem to be quite sexually obsessed with me.

For its part, Gawker changed the reference in the profile to “alleged rapist” – and followed with an apology:

Okay, fine. After some consideration, we’re sorry for calling you a "rapist" since you are more accurately "an alleged rapist." After all, we’ve never seen you doing the raping, only read about it.

For Nick Denton, 2009 has already kind of been the Year of the Lawsuit.

Francis’ threat notwithstanding, there are at least two outstanding lawsuits against Gawker at the moment: Eric Dane’s suit against Gawker’s screening of the so-called McSteamy sex tape – in which Gawker won a preliminary court battle recently; and Sean Salisbury’s suit against Gawker Media after a series of bizarre e-mails sent by the ex-ESPN football analyst to Gawker-owned Deadspin were posted on the site.