As TheWrap had previously reported, the senior Jackson served Murray with a notice of intent to initiate legal proceedings on March 27. Under California law, Jackson had to wait 90 days from the date the document was delivered. The 90 days were up Friday. 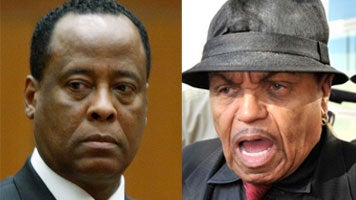 The suit against Murray was slightly delayed. The clerk at the federal district court in downtown L.A. had to send the documents back to Brian Oxman, the senior Jackson lawyer, mid-day because of an unspecified "mistake" in the paperwork.

Mistake or not, Murray’s lawyer asked Jackson fans and the general public to not jump to conclusions, even though the doctor is up on manslaughter charges in a criminal case in the singer’s death. “We’d like to remind people that Dr. Murray has not been found guilty of anything,” Charles Peckham,Murray’s civil lawyer told TheWrap, “We continue to maintain Dr. Murray neither prescribed nor administered anything that should have killed Michael Jackson.”

Explaining the purpose of the civil suit against Murray, Brian Oxman told TheWrap early Friday that his client “wants justice for Michael and wants to know how he died," The lawyer added, “the only way to do that is to get the subpoenas see all the documents and find out what really happened on June 25, 2009."

Now filed, the Jackson patriarch’s suit, which asks for a jury trial and unspecified damages, names Murray and his Texas clinics for “wrongful death … negligent hiring, training and supervision.” Michael Jackson died on June 25, 2009 of "acute propofol intoxication," according to the L.A. county coroner. The powerful prescription sedative was but one of many drugs in the singer’s system when he was transported to UCLA Medical Center and declared dead. 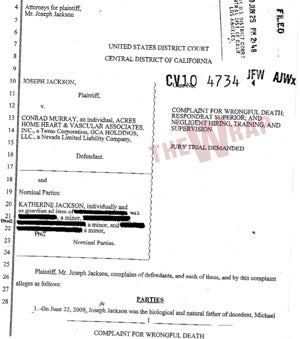 Murray was with Michael Jackson on the day the singer died and, based on the administration of medication to the singer, was charged with involuntary manslaughter in February.

The L.A. district attorney’s office said in the charge that Murray “did unlawfully, and without malice, kill Michael Joseph Jackson.” If found guilty, the doctor, whose next hearing in the criminal case is on Aug. 23, faces a prison sentence of up to four years.

The speed of that case is, according to his lawyer, part of Joe Jackson’s frustration.

“This case is now a year old and we still don't know how Michael Jackson died," Oxman told TheWrap. "The criminal case is going to take another year and a half and go into 2012. That is a long, long time to know what happened to your child.”

In his suit, Joe Jackson — who was left out of his sometimes estranged son’s will and in a separate case is also in court to have the estate pay him a $20,000 a month allowance — also names Katherine Jackson, the superstar’s mother, and his three children, Michael Joseph Jackson Jr., Paris-Michael Katherine Jackson and Prince Michael Jackson II, as “nominal parties.”

Oxman told TheWrap that the reason for their inclusion was that “when you do a wrongful death case, all the potential heirs must be included because they might share in any distribution from the case.”

The Jackson lawsuit, which claims that Murray cleaned up “the scene” and withheld important medical and drug information from medics, says that "Mr. Jackson believes there are other parties responsible for Michael Jackson’s death but has not yet gathered sufficient information regarding their potential liability or responsibility."

The suit also says, as TheWrap has reported, that Michael Jackson had a very weak pulse when was at UCLA and might have been able to be revived if doctors there had known the “polypharmacy” of medication the singer was being administered by Murray.

In another court round, Conrad Murray fought off an attempt in Nevada Friday to suspend his medical license because of unpaid child support.

According to Kristine Brewer, Murray’s lawyer in Las Vegas, "an anonymous benefactor who cares about him keeping his license” on Thursday paid the $5,214 the doctor owed for the support of his 12-year old son.

Under Nevada law, not paying the due money would have resulted in Murray, who has practices in California, Nevada and Texas, being unable to practice medicine in the Silver State.

(Pamela Chelin assisted in the reporting of this story.)