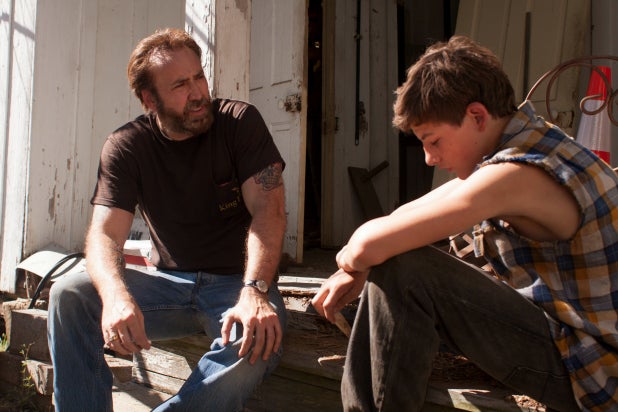 Given the choice between spending the day in the hot sun or in an air-conditioned soundstage, it’s no wonder so many movies are about people who work at desks and not in the dirt. Let us salute director David Gordon Green with a sweaty bandana, then; his last movie, the wonderful “Prince Avalanche,” followed two guys painting highway lines in Texas, and in “Joe,” Nicolas Cage stars as the head of a work crew whose job it is to kill trees so they can be cleared off a parcel of land.

Their implement of choice is an ax that releases poison, and anyone looking for a metaphor can start right there; the film is full of people being eaten up inside by alcoholism, rage, regret or just plain meanness. While Green deftly brings us into this small Texas town, perfectly capturing its inhabitants and their humid surroundings, the script by Gary Hawkins (adapting the novel by Larry Brown) overplays its hand — garden-variety jerks become outsize monsters, and the “Sling Blade”-flavored plot overwhelms the movie’s many subtle charms.

Joe (Cage) leads a quiet existence; he’s a hard worker and a good boss, but he avoids emotional commitment and seems never to be very far from an explosive rage, particularly whenever he has to deal with local law enforcement. He finds himself reaching out to Gary (Tye Sheridan), a 15-year-old boy looking for any kind of day labor to make money to feed his near-catatonic mother and sister and, eventually, to rescue his family from drunken dad Wade (Gary Poulter).

Wade spends his money on booze, and beats and neglects his kids, which makes him despicable enough. By the end of the film, however, Wade will murder another alcoholic for a bottle of cheap wine before committing a truly horrifying act that’s so very awful that it transmogrifies a low-key, human story into something that goes way over the top.

His accomplice in that final act is the creepy Willie-Russell (Ronnie Gene Blevins), who spends the film wanting revenge against Joe, who bested him in a bar fight, then turning his sights on Gary after the boy humiliates him with yet another beating. There are movies that could accommodate such nefarious mustache-twirlers as Wade and Willie-Russell, but they throw off the balance of “Joe.”

Before things get overly melodramatic, the movie draws us into Joe’s closed-off life and Gary’s optimism under fire, and the relationship that develops between these two characters is where the film succeeds most. Sheridan, so terrific in last year’s “Mud” — another movie in which plotting overwhelmed a simple character study — delivers another heartfelt performance; with any luck, he’ll get to play a different kind of character soon, before lazy casting agents pigeonhole him as the soulful Southern kid.

And then there’s Nicolas Cage, a performer who keeps demonstrating a lack of willingness to act until someone finally asks him to. If we wind up with a “Joe” or a “Bad Lieutenant: Port of Call New Orleans” for every run of “Season of the Witch” and “Trespass” and “Drive Angry,” however, it will be worth it.

Cage makes the character funny and angry and wise and foolish and hopeful and disappointed, and even if the film shoehorns him into a trite redemption plot, he makes Joe into someone we feel like we’ve gotten to know. (Cage even sells the moment where Joe looks at Gary’s suffering and says, to no one, “He’s me.”)

It’s Green’s restraint in storytelling, and his skill with actors, that make “Joe” so fascinating, and it’s a clunky script that turns it into such a disappointment. The chance to meet and spend time with Joe and Gary ultimately outweighs the terrible treatment that they suffer from both the other characters and the writer.