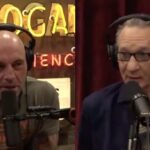 He also insinuated that Colbert “enjoys being the star of a show” and part of the “in-crowd,” adding that the comedian is likely doing it all for his “lucrative” salary.

The conversation turned toward Colbert when Rogan said he wouldn’t be able to have a career outside of being a comedian had he been born earlier. That’s when Shields brought up being a talk show host, which Rogan said he would “never” get.

Rogan has long disgruntled doctors and health care professionals over his dangerous promotion of anti-vax stance. Earlier this year, Spotify faced intense backlash for giving the podcaster a platform to spread his lies, which resulted in veteran musicians like Neil Young and Joni Mitchell boycotting the audio streamer.