Republicans like Rep. Lauren Boebert and former U.S. ambassador Nikki Haley descended on the tweet to criticize it for not mentioning veterans.

“Speaking of trite — and I hate to bring this up, I really do — but speaking of trite, you look at the trite attacks on the vice president on Friday,” said the “Morning Joe” host, at times with cynical laughter. [Editor’s note: Scarborough meant Saturday.] “You want to go after somebody because of policy, that’s something, but to use Memorial Day because she tweeted, ‘Have a nice long memorial weekend,’ or whatever? By the way, yesterday was Memorial Day. Let me just educate everybody out there: I know some of you are new at this. Some of you maybe have forgotten what it’s like to be Americans. I know the last four of five years have been sort of destabilizing for you.”

Co-host Mika Brzezinski offered up that the past half decade has been “un-American,” but Scarborough cautioned he wasn’t quite prepared to say that. 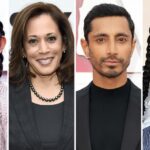 He called the “fake outrage” he observed “remarkably trite and small,” then reminded viewers that former president Donald Trump also tweeted about topics other than veterans on Memorial Days in the past. He called Trump “a guy who, for four and a half years, had absolutely no idea how to connect with those who have sacrificed for this country.”

“It made what happened on Friday all sort of the more trite — the more sad — that people were that desperate to attack on this weekend,” he concluded.

Co-host Willie Geist pointed out that ahead of the weekend, Trump released a statement about gas prices. That’s true: Last week, the former president emailed a statement to supporters and press that read, “With Memorial Day Weekend coming up, tomorrow people start driving in the biggest automobile days of the year. I’m sorry to say the gasoline prices that you will be confronted with are far higher than they were just a short number of months ago where we had gasoline under $2 a gallon. Remember as you’re watching the meter tick, and your dollars pile up, how great of a job Donald Trump did as President.”

Watch Scarborough and Geist above, via MSNBC.