According to co-host Mika Brzezinski, the agency had until Tuesday to turn over its records from Jan. 5 and Jan. 6, 2021, after being issued a subpoena by the House Select Committee investigating the insurrection. But Committee member and Florida Congresswoman Stephanie Murphy has confirmed that, while documents were handed over by that deadline, the Secret Service’s deleted texts remain unattainable.

“The Secret Service [is] now saying those messages that may have been able to corroborate some or even all of the events of Jan. 6 are likely gone forever,” Brzezinski said. 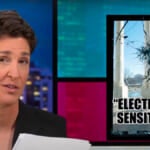 While the Secret Service maintains that there was scheduled phone maintenance that led to the texts’ deletion, the “Morning Joe” hosts later emphasized that their inability to cooperate in this investigation indicates where their loyalty lies. Scarborough called it a “cover-up” to protect Donald Trump.

With the revelation that the Secret Service’s texts cannot be recovered, Scarborough called on Attorney General Merrick Garland to launch an investigation into the matter.

“Wake up!” he shouted. “Hey Merrick, wake up! Investigate this cover-up.”

“Let me put it in stark terms for you in case you’re afraid to break Marquess of Queensberry rules in boxing,” Scarborough continued. “There is an attempted fascist overthrow of American democracy. The people the taxpayers pay to protect the presidency — not Donald Trump, but the presidency — they destroyed text messages that would’ve taken us to the heart of the fascist conspiracy to overthrow American democracy. This isn’t a normal day at the office, Merrick. This isn’t a normal day at the office for the head of the DHS. This is a cover-up of a fascist takeover of American democracy.”

Watch a clip of the “Morning Joe” segment in the video above. 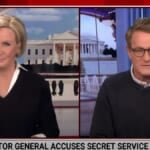