Bolton, speaking with Jake Tapper in a live interview, was talking about the Jan. 6 House committee hearings investigating the Capitol insurrection from earlier in the day.

During their conversation, Tapper questioned Bolton about Trump’s refusal to take no for an answer in terms of election results.

“When it comes to his personal advantage, the answer is he doesn’t listen to anybody else,” Bolton said. “Nothing Donald Trump did after the election in connection with the lie about the election fraud, none of it is defensible. It’s also a mistake as some people have said, including on the committee, the commentators that somehow this was a carefully planned ‘coup d’etat’ against the constitution. That’s not how Donald Trump does things.” 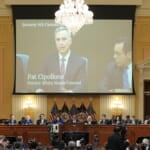 Also Read:
Jan. 6 Committee: Trump’s Incendiary ‘Be There, Will Be Wild!’ Tweet Followed ‘Heated and Profane’ Fight at White House

“You have to understand the nature of what the problem of Donald Trump is,” Bolton continued. “He’s, to use a Star Wars metaphor, a disturbance in The Force, and it’s not an attack on our democracy. It’s Donald Trump looking out for Donald Trump. It’s a once in a lifetime occurrence.”

“I don’t know if I agree with you, to be fair, with all due respect,” Tapper said. “One doesn’t have to be brilliant to attempt a coup.”

“I disagree with that,” Bolton said. “As somebody who has helped plan coup d’etats, not here, but you know, other places, it takes a lot of work, and that’s not what he did. It was just stumbling around from one idea to another. Ultimately he did unleash the rioters at the Capitol. As to that, there’s no doubt, but not to overthrow the constitution, to buy more time to throw the matter back to the states to try and redo the issue. And if you don’t believe that, you’re gonna overreact, and I think that’s a real risk for the committee.” 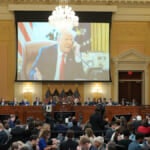 It was uncertain whether Bolton was referring to one coup attempt or more. But he later mentioned he wrote about a Venezuelan coup “in the book.”

In June 2020, Bolton published “The Room Where It Happened: A White House Memoir,” about his stint as a national security adviser in the Trump administration.