John Boyega may not be returning to “Star Wars” as Finn any time soon, but that doesn’t mean he’s not plugged into the new Disney+ shows that are happening. In fact, he was a pretty huge fan of “Obi-Wan Kenobi” — particularly Hayden Christensen’s part in it.

While at the premiere for Jordan Peele’s latest horror film “Nope,” Boyega told TheWrap that he’s been very on top of all the new series, even amidst his own busy schedule. “Of course I’ve watched them! Oh yeah, I watched them first day they came out,” he said.

Boyega added that he particularly enjoyed Disney’s latest series, “Obi-Wan Kenobi,” because it brought back Hayden Christensen as Anakin Skywalker/Darth Vader. Boyega made it clear that Anakin may not be everyone’s favorite, but he’s definitely got a lot of love in his own heart for the character.

“I think it was fun, it was good to see Ewan [McGregor]. It was good to see, you know, our guy Anakin — well, my guy Anakin, MY guy, back,” Boyega said happily. “For him to have more nuance and have more story as well, was just, for me, just phenomenal just to see.” 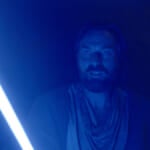 You can watch the moment in the video above.

Of course, Boyega isn’t the only “Star Wars” actor who was pleased to see Vader get a bit more depth in “Obi-Wan.” Hayden Christensen himself was also thrilled to return, and was particularly excited to explore the true scariness of the legendary villain.

“I’ve really enjoyed it. And certainly that was a part of the appeal for me was that, you know, we were going to sort of show a different side of this character,” Christensen told TheWrap in June. “He’s always been a very intimidating character, but there’s a sort of brutality that’s present now. And I think it’s great. You know, some terrifying stuff!”

You can watch TheWrap’s full interview with Christensen here.