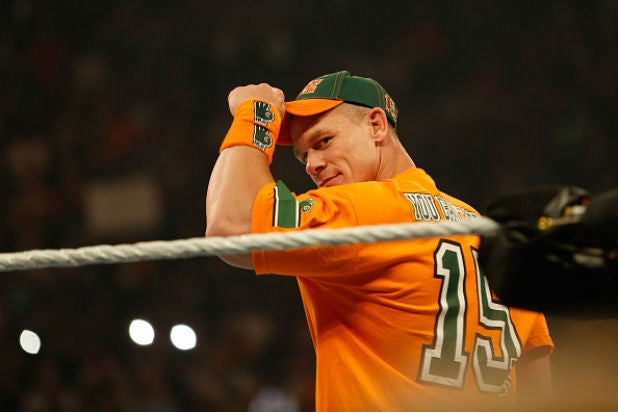 John Cena had a few medically required months out of the wrestling ring recently to think about his future. The WWE Superstar spent some of that time filming the Fox TV competition “American Grit,” something he hopes to repeat as soon as a renewal would make that possible.

Of course, Cena isn’t exactly new to entertainment — even beyond the walls of WWE’s many pay-per-views, the company’s own network, or basic cable TV shows “Smackdown” and flagship series “Monday Night Raw” — he’s recently acted in “Sisters” and “Trainwreck,” and starred in 2006’s “The Marine.”

The current face of professional wrestling wouldn’t mind doing more of that stuff, too, he told TheWrap Tuesday during a telephone interview. And Cena’s got the perfect role model to follow, even if it’s someone he’d been feuding with both professionally and (reportedly) personally up until recently.

At “Wrestlemania 32,” the injured Cena returned to clean house with his old wrestling rival Dwayne “The Rock” Johnson, sharing a nice handshake after they dropped the bad guys. That moment was particularly poignant, as he and Johnson weren’t exactly best buds in real life just a few years ago.

Now apparently all-patched up — both in terms of his shoulder injury and relationship with Johnson — Cena knows he needn’t look any further than Rocky for the clearest example of a tremendous crossover career that stretched from the squared circle to both the big and small screens.

“I can only hope to be mentioned in the same conversation as him,” the 38-year-old Cena told us two days before “Grit” premieres. “He has been a tremendous success.”

Like Johnson, Cena wouldn’t mind an eventual a transition to a less-dangerous and (possibly even) more-lucrative lifestyle. “I would only hope that’s where this crazy rollercoaster takes me,” he said.

Of course, Cena’s heart and gigantic muscles still belong primarily to the WWE Universe, and he likes seeing The Rock bring his own assets back for the big events — despite those things broadcast TV’s newest reality show star said (probably) both in and out of character just a few years ago.

“Dwayne never forgets the passionate fans of the WWE, never forgets what the WWE did for him as a human being,” Cena said. “He’s a stand-up guy, and the fact he’s succeeded in so many ventures in life and still always finds his way back ‘home’ — as I like to say — it’s extremely impressive, it speaks volumes of him and his character.”

We’ll see. For now, Cena’s smart enough to just be thinking about championship belts as he makes yet another comeback to the mat following surgery.

“The first thing you learn — and this is very true — is everyone is replaceable,” Cena said when we asked to qualify his unique responsibility and sheer importance as THE guy in the WWE. “The organization is most important to the organization.”

“I’m at a juncture in my career where it’s been 15 years now,” he reflected. “And if it serves me better to generate more awareness for what we do outside of what we do — and that’s so sad to say because I truly love what I do … That’s the overall mission statement of all of this.”

“American Grit” serves as one of those external promotional vehicles, he said. And Cena doesn’t care if viewers tune-in because they like him and end up loving the competition, or if they tune-in for the competition and his presence personally makes them want to try out the WWE — so long as folks watch.

Turns out U Can See Cena Thursday nights at 9/8c on Fox.