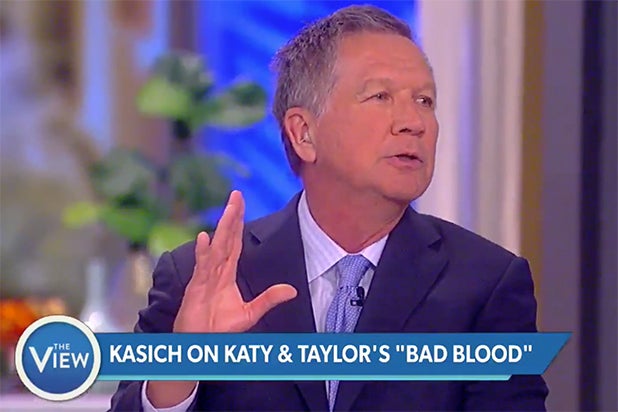 Ohio governor and former presidential candidate John Kasich tried to prove his pop culture bona fides on “The View” by weighing in on the feud between Katy Perry and Taylor Swift.

The conversation was prompted by moderator Whoopi Goldberg, who asked the politician for his “insight on a battle that has got this country split right down the middle” during his appearance on the “Hot Topics” segment on Wednesday’s show.

“Can you explain what the hell is going on with Taylor Swift and Katy Perry?” she asked, referencing the long-brewing conflict between the two pop stars over back-up dancers.

Kasich didn’t miss a beat in offering his two cents: “I’ll tell you, it’s shocking everybody,” Kasich said. “‘Don’t ever steal anybody’s dancers’ is the message.”

The governor went on to accuse the two stars of leveraging the feud for media attention.

“Maybe they’re just trying to get some extra press,” he said. “Although I don’t know if Taylor Swift needs any more press. In fact, she went into hiding, and they say she’s going to emerge with a new sound.”

Not content with just discussing personal drama, Kasich also dove into Swift’s musical career unprompted. He went on to explain that Swift’s last single, “I Don’t Wanna Live Forever” for the “Fifty Shades Darker” soundtrack, features a darker sound than she’s been known for in the past.

Also Read: Katy Perry Finally Confirms Taylor Swift Feud: 'She Started It and It's Time For Her to Finish It'

However, Kasich may have overextended himself, revealing the limits of his pop culture knowledge while discussing the Calvin Harris-Rihanna single “This Is What You Came For.”

Kasich incorrectly refers to the song as “Lighting” and says Swift and Harris dated “for a few weeks” (the duo were reportedly together for well over a year), proving that even the savviest politicians can only be briefed to a certain extent before appearing on daytime talk shows.

Regardless, Kasich only had kind words for both Swift and Perry, adding that he hopes the two stars will be able to repair their relationship, “because of world peace.”

“[Taylor Swift] met my wife and kids at a concert … she was just unbelievably great,” he said. “And Katy, I have a friend that knows Katy Perry, and she’s very talented.”

WATCH: Ohio Gov. @JohnKasich breaks down @katyperry and @taylorswift13's bad blood — who knew he was such a pop culture fan!? ???? pic.twitter.com/HKgQToiF6W