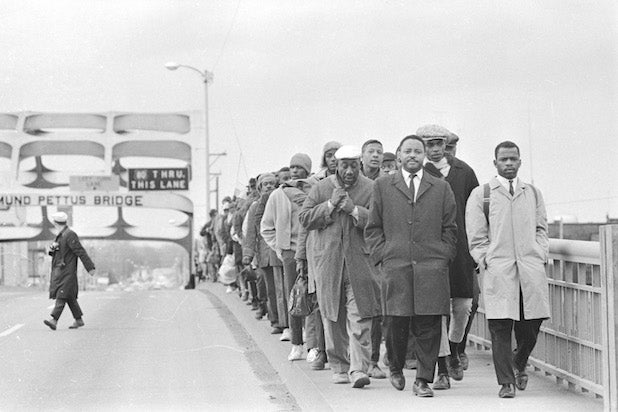 “John Lewis: Good Trouble,” a documentary about the civil rights crusader who became a 17-term Democratic congressman from Georgia, is a movie that could scarcely be any timelier.

And it’s also, strangely enough, a movie that feels outside of the current time.

How timely? Well, a couple of weeks before the premiere of the film, director Ava DuVernay and many others endorsed a proposal to rename the Edmund Pettus Bridge in Selma, Alabama, for Lewis, who suffered a fractured skull when he was beaten on that bridge during Martin Luther King’s 1965 march from Selma to Montgomery. “It’s past due,” tweeted DuVernay of naming the bridge for Lewis rather than Pettus, a senior officer in the Confederate army who later became a grand wizard of the Ku Klux Klan.

And the petition about the bridge is just one of many ways in which “John Lewis: Good Trouble,” which opens this week on VOD and in some theaters, is of-the-moment. There are many more ways, from Donald Trump’s recent retweeting of a video that included a “white power” chant, to the most recent nationwide #BlackLivesMatter protests, to the state of Kentucky recently closing 95% of its polling places in a move that disproportionately affected its black voters.

“There are forces today trying to take us back to another time and another dark period,” says Lewis early in Dawn Porter’s documentary. ” … My greatest fear is that one day we will wake up and our democracy is gone.”

At the same time, while Lewis is central to the struggles against systemic racism and oppression over the last 70 years, things have moved so quickly since the killing of George Floyd that his playbook of nonviolence feels generous to a fault. “We will meet the capacity to inflict suffering with the capacity to endure suffering — we will wear you down,” he said in the 1960s — but in the half-century since then, has racism worn down?

The film deals with the current times not by having Lewis address this particular moment — which, of course, had not yet been sparked at the time the film was completed — but by broadening into a wider discussion of voter suppression as it was used to disenfranchise Blacks in the mid-20th century and as it is being used today.

The film is both a tribute and a warning — it’s part John Lewis’ greatest hits and part civics lesson about today. The result feels a little scattershot, but both of those sides feel important, even essential in these times.

“John Lewis: Good Trouble” begins with Lewis sitting on a stool in the middle of a studio, watching footage of ’60s civil-rights marches play on screens around him. He is not one to look back and reveal details we never knew, or to offer surprising glimpses into his character – so instead, the film does a straightforward job of chronicling the life of a man who went from being a studious kid who wore a tie and carried a bible to high school every day, to a civil-rights crusader, to a congressional leader for three decades.

There is one startling moment when the congressman tears up as critic and historian Henry Louis Gates, Jr. tells Lewis that his great-great-grandfather got a voter registration card in 1867, as soon as he was able to — and that nobody else in the family voted until Lewis himself did nearly a century later.

The archival clips are mixed with more current, verité footage of Lewis walking around Washington, D.C., talking at rallies and in churches and meeting with aides. The new footage serves to place him in a current context, but it can’t match the impact of even the familiar and grainy film clips from the civil rights marches.

Lewis says he was arrested 40 times before going to Congress, and about five times since then; House Speaker Nancy Pelosi says of the 80-year-old representative, “He challenges the conscience of the Congress every day that he is here.”

While the film is for the most part an unabashed celebration of Lewis himself, it often detours into an examination of voter suppression, particularly in the 2018 election in Georgia. The tie to Lewis himself is clear: He was instrumental in pushing for the Voting Rights Act of 1965, which secured the right to vote for minorities without the barriers that were erected to prevent them from doing so. But the act was dramatically weakened by the Supreme Court in 2013, and since then 27 states have passed voter ID acts, moved polling places and otherwise made it more difficult for minorities to vote.

The battle that Lewis is waging in “John Lewis: Good Trouble” is on this particular battlefield, and it is one that echoes over the decades. “He reminds us that our past is not past,” says Georgia politician Stacey Abrams in the film.

“John Lewis: Good Trouble” is longer on that kind of praise than on any real insights into Lewis himself. But the man is certainly worthy of this kind of celebration, and it’s hard to imagine that anybody who watches the movie won’t agree with Ava DuVernay’s push to rename that bridge.