John Oliver concluded this Sunday’s “Last Week Tonight” with a quick, but deep dive into how local car dealerships make their ads. And, spoiler alert, it turns out a lot of car salesmen are using the same ad copy.

In tonight’s show, John Oliver rejoiced in the eccentricity of the small-time car dealer — who have always been kind of expected to be wacky and off-beat, and that is definitely made clear in some of their ads. For example, one ad featured the dealership owner saying a version of, “I’m in a pickle! My doctor told me to calm down before my heart explodes,” before saying, “The only way for me to calm down is to help you get a nicer, newer car.” And for some reason, the guy was dressed like a pickle, right next to someone in a very creepy Uncle Sam costume.

“OK, I don’t mind that. A guy dressed as a pickle next to an Uncle Sam that looks like Mark Cuban seeming to threaten that, if you don’t buy a car from him, he’s going to die,” Oliver said. “I actually like that… that’s some fun, local weirdness from Winston-Salem North Carolina that you’re just not going to get anywhere else, right?”

Well, no, it turns out that it wasn’t just some kitschy local gag, because Oliver then showed viewers upwards of six ads that were almost exactly the same and got pretty incensed about it. One man even got his daughter in on the act and had her deliver the “But dad, your heart will explode line” which was well, kind of disturbing, to say the least.

The “Last Week Tonight” producers really did some sleuthing for this episode, because Oliver said they found out that every car dealership that used the pickle script got it from one ad agency. There’s a firm in Orlando, Fl. called Gravitational Marketing that sustains itself selling scripts for local salespeople to use, and evidently, it’s got a lock on the small car dealership market. There’s nothing really wrong with this at all, it just bothered Oliver that car commercials were sort of standardizing their material instead of being completely original and unhinged.

Gravitational Marketing has written other outrageous scripts for car dealerships, like one that’s German-themed and promises “Car-toberfest” deals, or one where a guy either dresses or acts like a dog and says, “I’m in the doghouse, I need cars.”

No shade to Gravitational Marketing from us. But John Oliver wasn’t accepting what he thought was a low standard for some of this ad copy — he said, “Don Draper would put a cigarette out on your forehead” if the “Mad Men” patriarch was real and could see some of the campy ads.

Then he broke out one of the “Last Week Tonight” show’s old standards — a challenge to the audience. Oliver is offering anyone who sees the segment and owns a car dealership, a script (he put it in a manila envelope that said “VERY GOOD SCRIPT” on it) that they can use for free if they agree to sign a contract acknowledging they’ll use it in a commercial without reading it first. 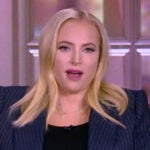 Also Read:
Meghan McCain Apologizes for Past Anti-Asian Comments After John Oliver Called Her Out

He also promised that the ad would be outrageous but not obscene. “We promise there is no cursing, blasphemy or nudity in here. it will pass broadcast standards in your area and it can be produced as cheaply as anything you’ve seen tonight,” he said, joking about the so-called blank void that “Last Week Tonight” has been broadcasting in since the pandemic began.

“Now, will this script show your dealership in a good light? That’s for you to find out after you sign this contract and agree to produce and air the ad sight unseen,” Oliver concluded. “So, who’s interested?”

Will this work, and is it possible we’ll find out what kind of script is in the mystery envelope sometime soon? Crowdsourcing gags is one of the things “Last Week Tonight” does best, so it’s entirely possible — you might recall the time Oliver used the show’s fan base to locate an artist in Pennsylvania that does “rat erotica” and bought the painting.

Oliver is actually using a similar email address for this new query, so send FreeCarCommercial@JohnOliverWantsYourRatErotica.Com an email if this bit piqued your interest — and find the full end of show bit on HBO Max.