Last Tuesday, Simpson tweeted a video of himself discussing Sunday night’s slap, saying Smith “was wrong,” but that he “understood the feeling.” Simpson also noted within the video that people had apparently been asking him for his opinion on the exchange.

Oliver was definitely not one of them.

“Nope, not you O.J., not you,” he said Sunday night. “No one wants to hear from you on this, especially when you seem to be coming live from the COVID patio of a Señor Frog’s. You can just sit this one out. Think of this situation like a rowdy bachelorette ordering a mimosa; we want as little juice involved here as humanly possible.” 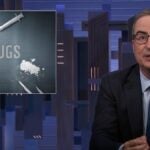 You can watch Oliver’s full thoughts in the video above.

This isn’t the first time Oliver has offered his opinion on unwanted opinions in recent weeks. At the end of February, the “Last Week Tonight” host discouraged former president George W. Bush from weighing in on Russia’s decision to invade Ukraine without any real cause.

“I join the international community in condemning Vladimir Putin’s unprovoked and unjustified invasion of Ukraine,” the former president said in a statement. Oliver’s response came pretty swiftly, and with similar wording as he used for OJ Simpson.

“Hold on, George. Not from you,” Oliver said. “You are not the guy for this one.” 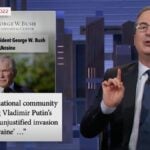 Also Read:
John Oliver Rebuffs George W. Bush’s Condemnation of Russian Invasion: ‘You Are Not The Guy for This One’

Oliver was, of course, referring to Bush’s own handling of the 2003 conflict with Iraq, in which he ordered U.S. troops to invade in late March, based on claims that Iraq had stockpiles of weapons of mass destruction that needed to be dismantled. A United Nations inspection team declared it had found no evidence of the existence of WMDs prior to the invasion.

“That statement only would have made sense if it ended with ‘Oh s—, now I hear it. Sorry. I’ll shut the f— up now,’” Oliver added.