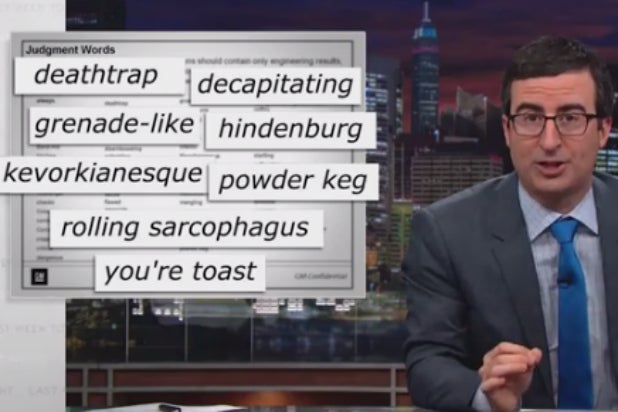 John Oliver says General Motors is a judgement-free zone — so judgement-free, in fact, that the company banned 69 “judgement words” about its cars, including “dangerous,” “crippling,” “hobbling,” and “life-threatening.”

GM has faced a crisis of late over its failure to fix an ignition key flaw in its cars that has killed at least 13 people. The cost of the defective part was 57 cents per car. As CNN has explained, the faulty part was redesigned in 2006, but GM failed to change the part number, which prevented regulators from figuring out what caused the accidents in which the 13 people died. Critics suspect a cover up.

But newly released documents mocked by Oliver on Sunday’s “Last Week Tonight” show that GM tried to get ahead of the crisis by banning judge-y words in 2008.

Oliver imagined the brainstorming that might have led to such banned words as “grenade-like,” “Kevorkianesque,” “rolling sarcophagus” and “you’re toast.”

“There are no bad ideas here, just bad cars,” he said, adding: “When demons have sex, those are their safe words.”

Oliver then imagined GM’s latest ad for cars that are anything but “gruesome potentially disfiguring sarcophagi.”