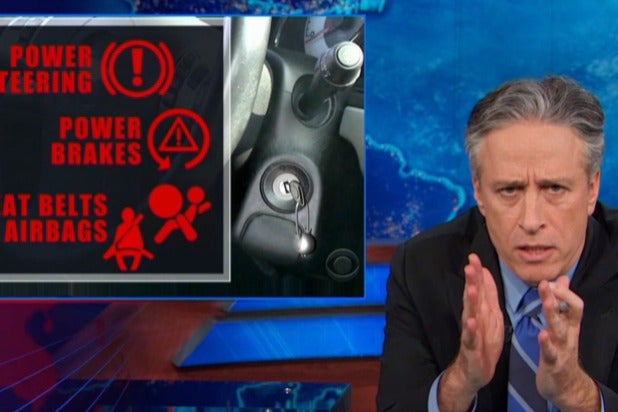 Jon Stewart says GM took years to fix an ignition key flaw in its cars that has killed at least 13 people.

The cost of the defective part: 57 cents.

As CNN explains, the faulty part was redesigned in 2006, but GM failed to change the part number, which prevented regulators from figuring out what caused the accidents in which the 13 people died. Critics suspect a cover up.

GM CEO Mary Barra told lawmakers Wednesday that the situation was “completely unacceptable.” She said an internal investigation was underway. (Federal investigations are underway as well.)

The flaw has led to a recall of 2.6 million vehicles. The problem caused ignition switches to move move suddenly to the off or accessory position, shutting off the engine, disabling power steering, power brakes, seat belts and airbags.

“For God’s sake, even if you’re strapped for cash, GM, you could have found at least that much in the seats of the cars you’re fixing,” he added. “The thing would have paid for itself.”

Stewart said GM tried to prevent problems by warning drivers not to use heavy keychains.

“Why fix a problem you created when you could just ask your surviving custmers to get rid of all their other keys?” he asked.