John Oliver is definitely concerned over the Democrats’ strategy in Pennsylvania, after they actively helped promote far-right candidate Doug Mastriano during his campaign.

After winning the Republican primary, Mastriano – who repeatedly promoted the baseless claims that Trump actually won the 2020 election, and also marched on the U.S. Capitol on January 6 – will face off in the general election against Democrat Josh Shapiro. Shapiro ran unopposed in the primary, but his team actually ran ads promoting Mastriano to his conservative base, which one local news outlet explained as a hope that “by boosting a more right wing candidate in a swing state, Democrats come out on top this November.”

“Well, that is f—ing risky,” Oliver marveled. “Because look, I get the tactic behind wanting to choose an opponent that you think you have a better chance of beating. But as has been made painfully clear over the last decade, the most extreme Republican isn’t necessarily the least electable.” 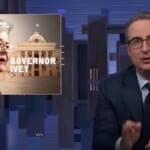 At that, a graphic appeared depicting Republican lawmakers like Marjorie Taylor Greene, Matt Gaetz, and more.

“So I really hope Democrats know what they’re doing with Mastriano,” Oliver continued. “But they will be making a huge mistake in underestimating him because, if I may quote my own favorite tie, ‘All things are possible. And most of those possibilities are very bad.'”

With those words, Oliver held up his tie, which literally had that same phrase printed on the bottom of it. The joke is a direct jab at Mastriano himself, who often wears ties with phrases on them, like the one Oliver dubbed a “chaotic nightmare” which includes “words like ‘Praise God’ and ‘Praise Him’ in a design I can only describe as biblical Xerox mistake.”

You can watch Oliver’s full segment on Doug Mastriano in the video here and above.