Both “And Now, This” bits in Sunday’s “Last Week Tonight” episode were about the dog show, which took place June 12 and 13 in upstate New York. The first one was John Oliver and his writing team suggesting some new names for the dogs that competed and placed in the Dog Show.

In trademark “Last Week Tonight” satire style, the show introduced the segment as if the joke dog monikers were actually real, and said, “Now, please enjoy some of the better names from this year’s Westminster Dog Show.” Some of the suggestions were pretty normal — like Dennis, for example. But a few were pretty out there; although not necessarily bad names for dogs at all, especially if you want to give someone a laugh when you yell for the dog in public. 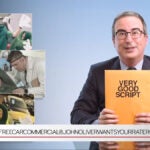 The Best in Show winner this year was a three-year-old Pekingese named Wasabi, and John Oliver suggested that being Best in Show, a more fitting name for the dog would be Jennifer Aniston. The second “And Now, This” bit was a supercut of local news anchors basically insulting the dog or being blown away by its huge hair. “It looks like a wig,” one anchor couldn’t stop exclaiming.

But in a blink-and-you’ll-miss-it moment, one of the dogs was dubbed with a reference to a popular theory about the murder of President John F. Kennedy — yes, we’re serious. The show called one canine competitor “Cuban exile and CIA asset Antonio Veciana claimed he witnessed a high-ranking CIA officer meet with Lee Harvey Oswald in September of 1963.”

It’s long been speculated that the CIA somehow was involved in the murder of JFK; although there’s nothing to confirm this, Veciana is a real person and he has repeatedly said and written that he thinks the agency somehow planned JFK’s November 1963 assassination.

Veciana was a certified personal accountant in Cuba who says he was recruited and trained to spy for the CIA with the goal of assassinating Fidel Castro. Veciana said he was recruited by David Atlee Phillips, a top CIA spy who also went by the name Maurice Bishop, shortly after the failed Bay of Pigs invasion. Veciana was allegedly told to try to kill Castro in 1961 with a bazooka but the plan went awry.

Veciana has since claimed that he saw Phillips meeting with Lee Harvey Oswald, the man arrested for assassinating JFK — implying that the CIA somehow orchestrated the killing.

So, why did “Last Week Tonight” throw this in there? Honestly, we’re not sure. It’s certainly a puzzler, but it wasn’t the only outlandish name that was put in the mix. And in the case of insane coincidence, we must ask: If you’re reading this and own a pooch you’ve named “Cuban exile and CIA asset Antonio Veciana claimed he witnessed a high-ranking CIA officer meet with Lee Harvey Oswald in September of 1963,” well, please call us, we have several questions.

Among the other name suggestions John Oliver and his team came up with were a few named after food — like a small, oddly shaven dog they renamed Raisnet and a Mastiff dubbed Beef.

For some inexplicable reason, they also hilariously decided that a huge Siberian Husky should be just named “Crime,” and gave a nod to “Star Trek” and Sir Patrick Stewart by renaming a Miniature Schnauzer “Captain Jean-Luc Picard.” Other suggestions included “Drama, Good Carl and Bad Carl, Smooth Chris, Dennis,” and, perhaps most adorably, a Pembroke Welsh Corgi they called “Ragnaroth Devourer of Souls.”

Check out both bits in the “Last Week Tonight” clip at the top of the page.