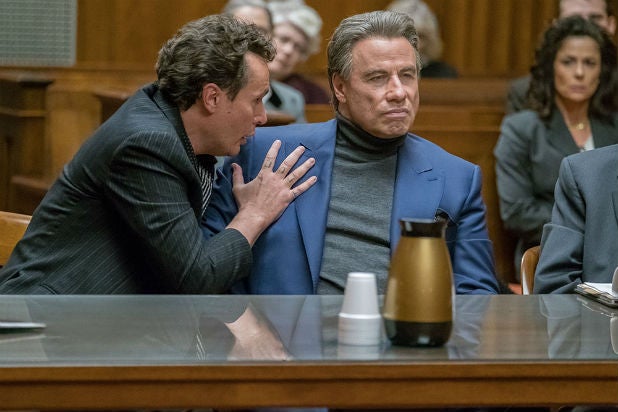 John Travolta’s new movie “Gotti” hit rock bottom faster than a cinderblock tied to a body being thrown into a river.

“Gotti” has scored a zero percent rating on Rotten Tomatoes from film critics, a rare feat managed by only a few dozen movies. At the time of this writing, only 17 reviews have been counted for the film, so the film’s fortune could change. But, as of now, all reviews of the Travolta film are currently are rotten.

“That the long-gestating crime drama Gotti is a dismal mess comes as no surprise. What does shock is just how multifaceted a dismal mess it is,” Glenn Kenny wrote in his New York Times review.

“He may have been a murderer, but even Gotti deserved better than this,” Brian Tallerico says at RogerEbert.com.

While “Gotti” is currently listed as the lowest rated film of Travolta’s career, this is the fourth movie under his filmography to get saddled with a goose egg aka zero score, including his last scored film “Life on the Line” from 2016, “Look Who’s Talking Now” from 1993 and “Staying Alive,” which came out in 1983. The notoriously awful “Battlefield Earth” has a paltry 3 percent on Rotten Tomatoes. (Rotten Tomatoes debuted in 1998. Movies that came out before that are scored retroactively, often based on newer reviews, written years after rated films entered theaters.)

“Gotti” is directed by Kevin Connolly of “Entourage” fame and is a biopic about the life of Italian-American mobster John Gotti and his son. It also stars Stacy Keach, Kelly Preston and Spencer Rocco Lofranco as John Gotti Jr. Lem Dobbs and Leo Rossi wrote the screenplay.

The film played at Cannes back in May and received the same unanimously negative reaction from critics at the festival. “Gotti” is a passion project of Travolta’s that dates back to 2011. In late 2017, Lionsgate pulled the film from their schedule 10 days before it was set to hit theaters and sold it back to the production company Emmett/Furla/Oasis Films.