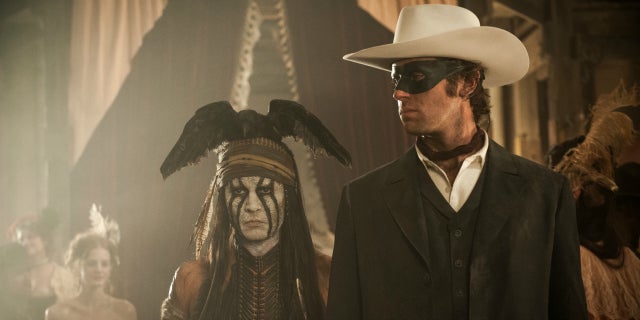 It’s been a rough few years for professional film critics, between the slow decline of newspapers and the proliferation of enthusiastic online cinephiles with opinions and internet connections.

But hark, from out of the sunset come riding Johnny Depp, Armie Hammer and producer Jerry Bruckheimer, here to make critics feel relevant and powerful again.

This trio has been telling the British press that it’s entirely the fault of us ink-stained wretches that their expensive Western “The Lone Ranger” laid a big egg in the United States, earning just $86 million against a budget of 437 super-kajillion samoleons.

And the content of this troika’s complaints is so flimsy that it’s worth examining each argument one by one.

DEPP: “I think the reviews were written when they heard [director] Gore [Verbinski] and Jerry [Bruckheimer] and me were going to do ‘The Lone Ranger.’ They had expectations that it must be a blockbuster. I didn’t have any expectations of that. I never do.”

I can’t speak for all critics, Mr. Depp, but trust me when I tell you that most of us do our best to go into every film with no preconceived notions. (This gets harder and harder to do as movie marketing goes up our nose every time we click on a website, turn on our television or open our eyes in public.)

See video: Johnny Depp on Retirement: 'Probably Not Too Far Away'

BRUCKHEIMER: “I think they were reviewing the budget, not reviewing the movie. The audience doesn’t care what the budget is — they pay the same amount if it costs a dollar or 20 million dollars. It’s unfortunate because the movie is a terrific movie, it’s a great epic film. It has lots of humor. It’s one of those movies that whatever critics missed in it this time, they’ll review it in a few years and see that they made a mistake.”

Yes, clearly film critics are obsessed with bringing down big-budget movies. That must be why “Iron Man” and “Avatar,” two expensive films of recent vintage, were roundly praised. Heck, even Bruckheimer’s own “Pirates of the Caribbean: The Curse of the Black Pearl,” scored a strong 79 percent on the review aggregator site Rotten Tomatoes — and last time I checked, that first “Pirates” movie wasn’t made in Bruckheimer’s parents’ basement, with the producer maxing out his Visa.

Whether time will be kind to “The Lone Ranger” will be up to history to decide, but as for Bruckheimer saying the movie is terrific, great and funny, well … every father thinks his child is the smartest and the prettiest.

HAMMER: “They tried to do the same thing with ‘World War Z.’ It didn’t work, the movie was successful. Instead they decided to slit the jugular of our movie.”

Putting aside the fact that “World War Z” currently has a “fresh” rating on Rotten Tomatoes, I want to address the notion of “they tried,” as in, “an organized cabal of film critics everywhere decided as one that they were all going to do something in tandem in the hopes of achieving a desired effect.”

I invite you, Mr. Hammer, to sit in on any meeting of the Los Angeles Film Critics Association or any other film critics enclave and afterwards, tell me how much groupthink you observe. Film critics do what they do because they value their own judgment and opinion, and if you think a mass of us could conspire to agree on where to go to lunch, much less what Hollywood productions we’re planning to torpedo, you clearly need to meet more of us.

It’s admittedly very flattering, gentlemen, that you think that the critical establishment is responsible for the catastrophic domestic box-office performance of “The Lone Ranger,” but it’s also hilarious.

“The Lone Ranger” stunk so much so that audiences got an immediate whiff and stayed away.