JoJo Siwa is getting her own hybrid documentary series. Facebook Watch has greenlit the series “JoJo Goes,” the platform announced Wednesday.

The series, which will premiere this summer, will feature Siwa as she is joined by her celebrity friends to partake in some crazy fun adventures she’s always wanted to experience but never got the chance. It’s a hybrid docuseries because it combines documentary elements and pre-planned adventures in the episode.

“I’m so excited to partner with Facebook Watch for ‘JoJo Goes’! I will be going on some crazy fun adventures and I can’t wait for my fans to see what new things I try out with some of my best friends! Make sure to check it out,” Siwa said in a statement.

Production for “JoJo Goes” has already begun in Los Angeles. 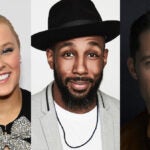 Also Read:
‘So You Think You Can Dance': JoJo Siwa, Stephen ‘tWitch’ Boss and Matthew Morrison to Judge Season 17

“JoJo Siwa has become an important voice for her generation and is beloved for her talent, courage and honesty,” Mina Lefevre, Head of Development & Programming, for Meta, said in a statement. “We look forward to seeing JoJo and her friends explore all of the exciting experiences we have lined up, along with our wonderful partners at B17 Entertainment, pushing themselves outside of their comfort zones in a way audiences have never seen before.”

“JoJo Siwa’s boundless positivity and message of self-love have made her an inspiration to millions who have watched her grow up on stage, tv, and online,” Aliyah Silverstein, SVP of Current Programming and Executive Producer, B17 Entertainment, said in a statement. “This series takes fans along for the ride as soon-to-be 19-year-old JoJo explores all the off-stage passions and quirky paths that haven’t fit into her daily life as a super celebrity. It’s an entirely new side of JoJo that we are excited to share.”