This weekend saw “Joker” become the first movie with an R rating to gross $1 billion at the box office. That alone is enough to immortalize it in the comic book movie canon. But when compared to some of the big DC and Marvel tentpoles that have defined the movie ecosystem over the past few years, it’s amazing how Gotham City’s most infamous villain has beaten the superheroes at their own game.

To show just how special “Joker”‘s box office run has been, look at the film’s domestic and overseas performance to a small sample of comic book movies that it has passed on the all-time charts:

— “Justice League,” a film featuring all of DC’s biggest superheroes

— “Batman v Superman: Dawn of Justice,” a DC film with a similarly dark tone to “Joker”

— “Suicide Squad,” the last DC film to feature a version of the Joker

— and “Thor: Ragnarok,” a Marvel film released in autumn 2017 that was a hit with audiences.

Against those four films, “Joker” had an $96.2 million opening well below that of the latter three and only slightly above the $93.8 million start of “Justice League.” But as you can see in the chart below, “Joker” has lasted longer with audiences than any of those films and is on the verge of passing the entire domestic run of “BvS.” 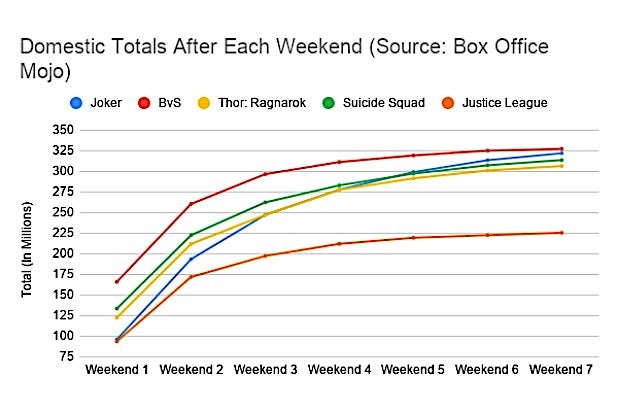 This is partly because “Joker” has taken advantage of weak competition. Films like “Maleficent: Mistress of Evil” and “Terminator: Dark Fate” haven’t made a big splash with audiences, allowing “Joker” to sustain its status as the sole can’t-miss film a lot longer than our current, content-overloaded pop culture allows a lot of movies to have.

But of course, that required “Joker” to strike a chord loud enough to have such can’t-miss status to begin with. As we noted last month, “Joker” was able to hit that increasingly rare sweet spot between pop culture phenomenon and critical darling. Its big Venice win and fears of triggering real life violence kicked pre-release buzz into overdrive, and the overwhelmingly strong response from the usual comic book movie crowd spilled over into the general moviegoing populace, allowing it to linger in the top 5 for over a month.

But that’s only half of the story. What makes “Joker” a truly special box office hit is that unlike many of its comic book brethren, it grossed $1 billion without the aid of China.

Instead, it vastly overperformed in many other major markets, showing the same kind of long-lasting performance all over the world that it did in the U.S.. In the next chart, you can see how “Joker” and the four films we chose stacked up in “Joker”‘s five highest grossing international markets: United Kingdom, Mexico, Japan, France and Germany. 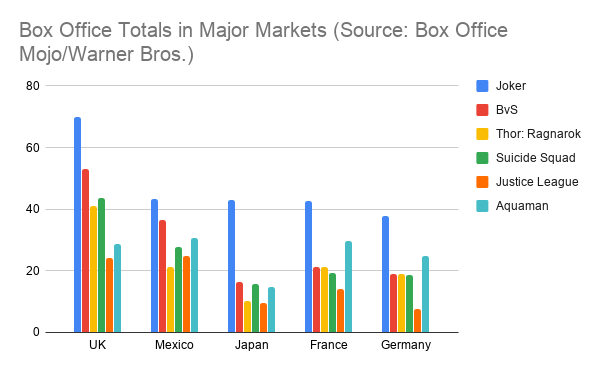 Not only does “Joker” have totals that dwarf those of all the others — including $70 million in the U.K. — it also beat the other DC film that grossed $1 billion in the past year: “Aquaman.”

With “Frozen II” kicking off the holiday movie season early next weekend, it’s likely that “Joker” will see its final global total fall short of the $1.14 billion that “Aquaman” grossed last winter. But even if that happens, it’s only because “Aquaman” had a Chinese release and “Joker” didn’t. Take away the $291 million that “Aquaman” grossed in the Middle Kingdom, and its global total drops down to $857 million.

It’s difficult to say whether “Joker” can become a trendsetter when it comes to comic book movies, but it certainly has pushed the boundaries on what can be done with the genre and what global audiences will respond to.

Following the critical disappointment of “Batman v Superman” and “Justice League,” much discussion was had about the “grimdark” tone that DC Films was using towards its superheroes. But while films like “Wonder Woman” and “Shazam!” have pushed the heroes in a more hopeful direction, a “grimdark,” Scorsese-inspired tale about a DC villain was embraced by audiences as something unique and fresh.

And unlike the other $1 billion-plus superhero hits — even the “Avengers” films — “Joker” did it all on a mid-sized budget. With a production cost reported to be in between $55-70 million, “Joker” has provided Warner Bros. with one of the biggest returns on investment in blockbuster history. Even as other WB films like “The Kitchen,” “Motherless Brooklyn” and “Doctor Sleep” have flopped this autumn, “Joker” has joined forces with “It: Chapter Two” to erase any financial losses those films may have incurred.

It may be a good while before we see a box office run from an R-rated film like this again.