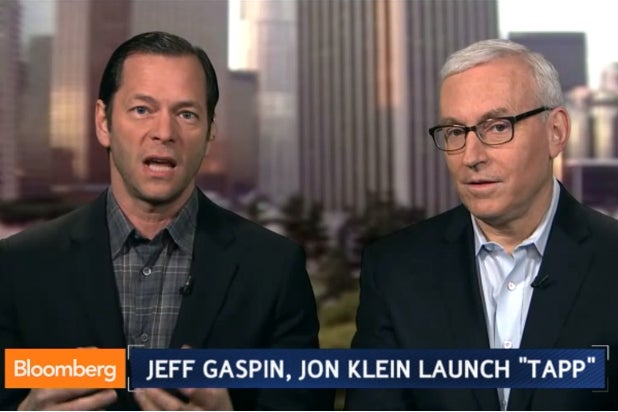 Former CNN President Jon Klein and former NBC Universal Chairman Jeff Gaspin announced on Tuesday the launch of the latest generation of online ventures, called TAPP, a paid, online video platform featuring multiple channels based on individual media personalities. TheWrap spoke to Klein in the wake of the announcement. Klein will be CEO, while Gaspin will be chairman.

How did this venture come about?
Jeff and I both came to this from different directions. At CNN I used to sit there and wonder when it would occur to Anderson Cooper and Sanjay Gupta and Christiane Amanpour that CNN needed them more than they needed CNN these days. Technology allows personalities to connect with their biggest fans.

To me TAPP is the fulfillment of that. We’ve created the company that I feared would come along .

For Jeff, who oversaw distribution at NBC, he helped establish young networks… We’re living in the age of specificity – whether it’s a TV channel that let’s you pick the star you love most and watch their network and pay for that. You get more of the person you love and less of the person you don’t care about.

TAPP will take advantage of that.

Who have you signed for the network?
We haven’t talked about personalities and channels, but basically we’re looking for personalities who have a strong social presence – it could be on the radio show, a TV series, a blog, where they have regular contact with the audience. People with an intense base of super fans who crave more from their idol.

So, more Howard Stern?
Howard Stern is a good example of that personality. There are a lot of people who are not household names bur nonetheless have millions of loyal fervent fans who want more of them. That’s a rich vein for us to tap.

And you’ll monetize this how?
We charge a monthly subscription fee — $9.95 a month. You pay per channel. We’re not building up the TAPP brand initially, the brands of our stars are so strong.

How much money have you raised?
A lot of money from Discovery, they’re a major investor and on our board. And individuals including Eric Schmidt of Google, Ken Moelis of Moelis & Co, Peter Ezersky of Quadrangle – it’s a fantastic group.

Is this what, in the $50 million range?
We’ve got deep pockets to spend. Enough to really put the pedal to the metal.

Where will you be based?
We’re based in the cloud right now. Jeff’s in LA. I’m in New York. We’ll have production facilities at each of the channels. We meet every day on Skype.

When will be the first rollout?
The first channel rollout is in the next month, we’re in the midst right now of taping some of shows.

And how many stars have you signed?
We’ve got a number of stars. A number of personalities.

And I hear agents are calling you today?
Yes, and that’s great.