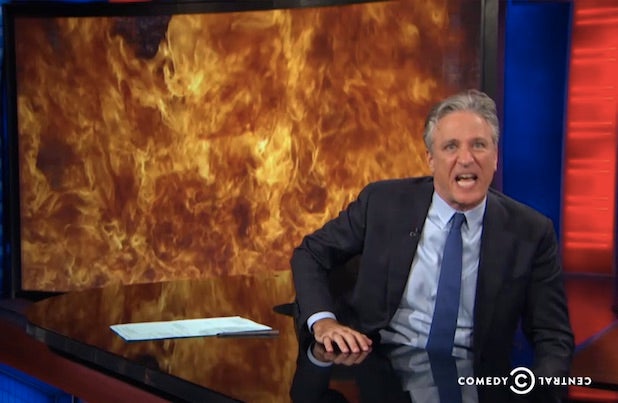 It was an emotional night for Jon Stewart on Monday as he bid adieu to his favorite frenemy, the Fox News Channel.

“They didn’t seem to support their assertions with evidence,” Stewart said after playing clips of Howard Kurtz criticizing him for visiting the White House and speaking with President Obama several times.

Stewart then showed Fox News praising him in the past for going after Obama administration officials on the “Daily Show” in contrast to slamming him now for speaking to the president.

He then played a sequence of clips showing political collusion at Fox News between network executives and politicians and pundits.

“My hunch is this show has been harder on the Obama administration and this president per capita then you ever were in your eight years of Bush finger banging,” he concluded.

Stewart then lit a fire and screamed “adios motherf–ker” to Fox before a voice of God told him he still has three more shows left.