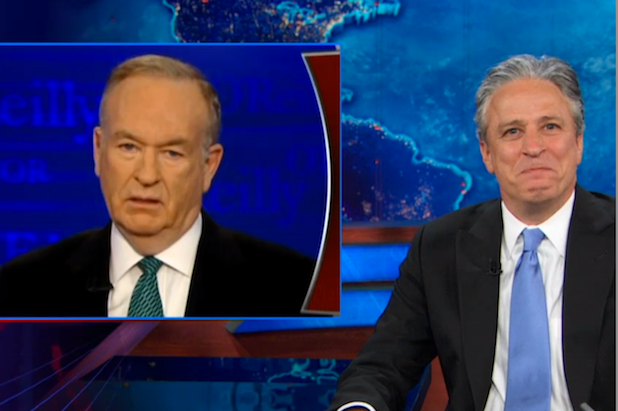 Jon Stewart deconstructed the media pundits’ outrage over loosening marajuana laws on Tuesday’s edition of “The Daily Show” and discovered that the problem with pot is that it a gateway drug to all manner of juvenile excess.  On his Fox News program, O’Reilly declared that smoking pot is “literally Russian Roulette,” noting that some adult users can handle being stoned, while others…eat a lot of junk food?

“I think the only difference between a bong hit and pointing a loaded gun at your own skull is that the gun can kill you instantly and must never be criminalized or restricted in any way ever,” Stewart said.

O’Reilly noted that the greatest threat to America’s youth may not be ganja, but mobile technology. Seventy five percent of teenagers between the ages of 12 to 17 have cell phones and virtually all of them text, O’Reilly noted. From there, it was just a tortured logical leap to surmise to texting is tantamount to addiction. The children — THE CHILDREN!!! — are obsessed with instant communication, which makes it increasingly difficult for America to compete with China, O’Reilly argued.

“Why can’t America be more like the People’s Republic of China?” Stewart said.  “While the truth is the Chinese use text messaging more than anybody else in the world, I guess the thought behind this is you could keep kids from texting so much by restricting the size of their families through central planning.”

But back to marijuana. In the case of David Brooks, the New York Times opinion writer freely admitted that he was a teenage pot smoker, but abandoned the bong for more adult pursuits.

“I think the state, through its laws, should encourage a culture that discourages the use of marijuana on both moral grounds and health grounds,” Brooks argued in a clip shown on “The Daily Show.”

“…now that I no longer use it,” Stewart joked.