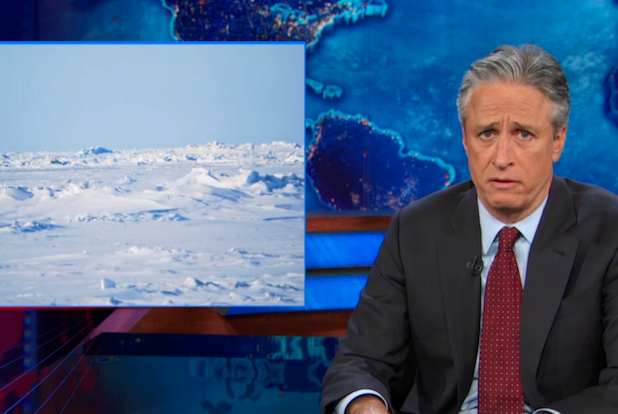 In his first show of 2014, Jon Stewart tried to turn the page on the fights over gay marriage and state house Christmas displays that made last year among the most politically divisive ones in recent memory.

His New Year’s resolution lasted for less than a minute, however, with “The Daily Show” host noting that conservatives and liberals have something else to wrangle over now that much of the Northeast is covered in snow.  With that, Stewart showed clips of Fox News hosts and pundits citing the recent cold front as evidence that the ozone layer is doing just fine, thank you very much.

Also read: John Oliver Urges Donald Trump to Run in 2016: ‘I Will Personally Write You a Campaign Check’ (Video)

“The War on Christmas is over,  the War on Carbon begins,” Stewart said, calling global warming just one more “liberal conspiracy.”

“Apparently decades of peer reviewed study can be, like a ficus plant, destroyed in one cold weekend,” Stewart said.

As Fox News firebrands noted, many of the scientists who warn of melting ice caps and rising sea levels are paid for their research. In contrast, the petroleum industry is apparently motivated to poke holes in global warming studies out of a sense of altruism.

“The integrity and research of corporations saving millions of dollars by denying climate change is unimpeachable, but keep an eye on those tricky global warming scientist thousand-aires,” Stewart said. “I’ve never trusted them since I found out one of the elements on their periodic table — gold.”

“The Daily Show” host suggested a way for both sides to reach a consensus.

“It seems like there’s a simple way to solve this,” Stewart said. “Just bring on someone whose opinion we all respect and whose expertise in this field can not be denied.”

Fox News answered with Donald Trump. “The Apprentice” host noted that the cold weather in Manhattan should send a message to science — global warming is a hoax.

“Mr. Trump would never conceal a bald faced truth of go to any effort to hide when something’s clearly receding over the years,” Stewart said.