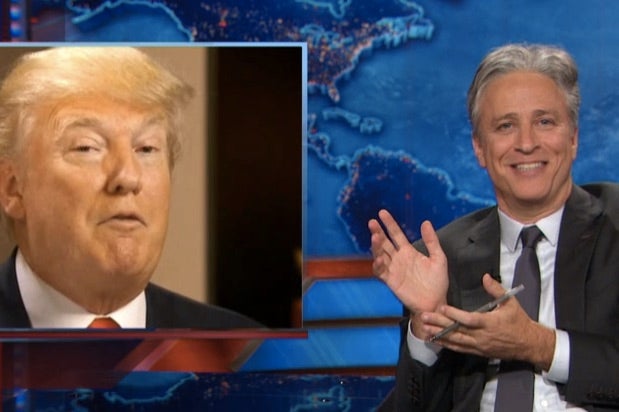 Jon Stewart addressed the GOP’s freak out to “good news-mageddon” Monday, and went after Republican presidential candidates for their “hyperbolic apocalyptic rantings” to the legalization of same-sex marriage.

“Truly a moment of joy, or to put that another way…” Stewart said before playing a clip from Senator Ted Cruz equating the Supreme Court’s rulings on same-sex marriage and Obamacare to the “darkest 24 hours in our nation’s history.”

The “Daily Show” host then took on the Republican candidate’s for attacking the mere existence of the Supreme Court all because they don’t agree with a few rulings.

“Who the f–k put this in here?” Stewart said, impersonating the Founding Fathers asking who put this Supreme Court thing in the Constitution.

“Perhaps it’s time we go back to when a Supreme Court was just a court with extra sour cream,” he joked.

“Here’s what I’m telling you, I am for traditional marriage, but to be fair, the Trump business is harder than any wife could possible be,” Stewart said while doing his best Trump impersonation. “Wouldn’t you fuck one of my golf courses? I think you would.”