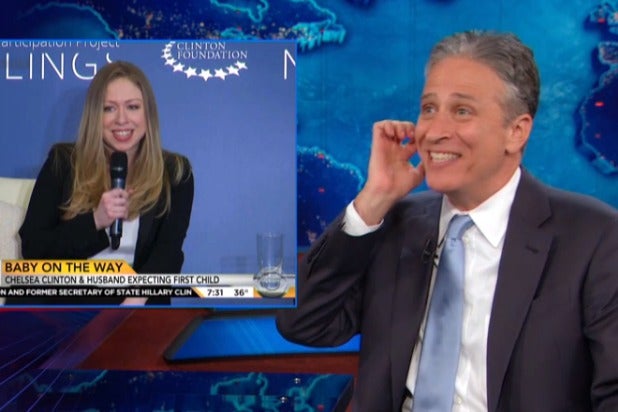 Jon Stewart detects a double standard in questions about asking how Chelsea Clinton’s pregnancy might affect her mother’s presidential campaign.

“No, no, silly billy, it’s not sexist,” Stewart said on Tuesday’s “Daily Show.”

“Even though it’s a question that has never, ever been posed to a male candidate ever. For God’s sakes, Mitt Romney has like a litter of grandchildren. If I’m not mistaken, Mitt Romney has like a grandchildren petting zoo,” Stewart continued. “He is the only candidate in history whose electoral college total is less than the number of chairs he has to put out at Thanksgiving.”

Stewart concluded: “It’s as though men and women are treated differently.”

The host took aim at the double standard in a segment called “The Broads Must Be Crazy,” which pointed out that women, unlike men, are often accused of letting their emotions interfere with their judgment.

Stewart pointed to former CIA Director Michael Hayden, who recently said Sen. Diane Feinstein’s motivation for releasing a  report on government torture may have been “deep emotional feeling on the part of the senator.”

Defenders of New Jersey Gov. Chris Christie, meanwhile, have said an aide accused of a role in the state’s “Bridgegate” scandal seemed to be overly “emotional.” Supporters of the aide, Bridget Anne Kelly, say she is taking the fall for the governor.