We never thought we’d see the day, but Jon Stewart, the outspoken former “Daily Show” host,” and OANN anchor Jack Posobiec are surprisingly on the same side of a hot-button issue.

Stewart was in Washington, D.C. to continue his support of the PACT Act, which would extend medical benefits to vets who’ve been left injured or disabled, when he crossed paths with Posobiec, who’s best known for promoting the QAnon “Pizzagate” conspiracy theory.

In a video posted to Twitter by Benny Johnson of Newsmax, Stewart shouts at Posobiec and calls him a “f—ing troll,” but the two eventually settle their differences enough to come together to endorse the bill, which was just defeated in a re-vote in the Senate. 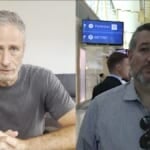 Also Read:
Jon Stewart Takes Down Ted Cruz and His Excuse for Flip-Flop on Veteran-Aid Bill as ‘Bulls–‘ (Video)

In the video shared to his Twitter account, Posobiec introduces himself, former Marine Tim Jensen of Grunt Style and Stewart, saying, “Jon Stewart and I have decided to come to an agreement. Have we not?”

“Yes, sir,” said Stewart, who was calm but did not appear eager to stand any closer to the alt-right activist. “I lost my temper a little bit. I felt like I was being trolled and I realized that the important thing is we just gotta get this done for these guys and get them over the finish line to get the healthcare they need.”

Stewart agrees and the video, which you can watch below, ends with Posobiec and Stewart shaking hands.

Last week, Stewart shared a video message refuting Sen. Ted Cruz’s reasons for switching his vote from “yes” to “no” on the act, which initially had strong bipartisan support.

GOP Sen. Pat Toomey responded to Stewart’s claims of “bulls—,” retorting that the comedian is a “pseudo-celebrity” who is making up “false accusations” over the Republican reversal. 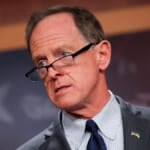