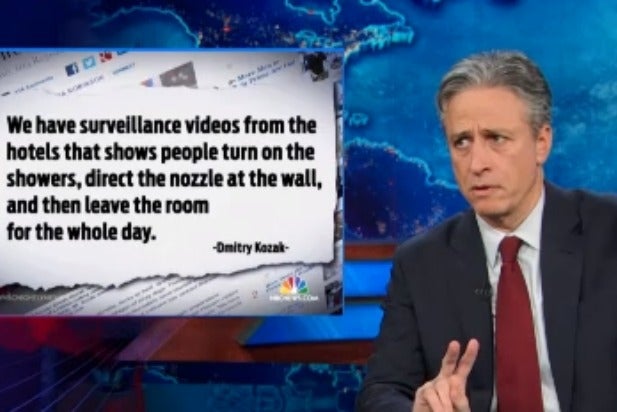 Jon Stewart would like to congratulate U.S. bobsledder Johnny Quinn on winning the U.S.’s first gold in “bustage” — a new Winter Olympics event in which athletes break down shoddily constructed doors.

Quinn competed in “bustage” — the accent is similar to the one in “dressage” — while trapped in a bathroom in Sochi, Russua, site of the games. Stewart says Quinn overcame a competitor better known for breaking down walls: The Kool-Aid Man.

Stewart took issue with lots of the Olympics living conditions on Monday’s “Daily Show.” When a Russian official revealed that secret surveillance video shows some journalists may be sabotaging their own rooms, Stewart explained why that isn’t the best defense.