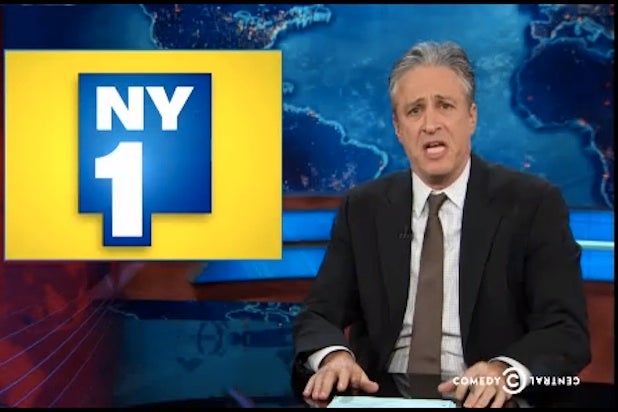 Jon Stewart had some choice words for Rep. Michael Grimm, who threatened to throw a reporter off a “f—ing balcony,” following President Obama’s State of the Union address.

And it turns out there’s a news outlet that Stewart actually likes: NY1, the local New York news channel that employs the reporter the Staten Island lawmaker threatened.

Also Read: Congressman Threatens Reporter After State of the Union Interview: ‘I Will Break You in Half’ (Video)

“To be fair, ‘I will throw you off this f—ing balcony’ is a relatively standard and traditional Staten Island goodbye,” Stewart said of the Staten Island congressman.

“But you know what’s almost more upsetting than knowing that Republicans from day one planned to sabotage the administration in every way that they knew how?” Stewart said. “Or that the guy threatening to hurl a NY1 reporter off a balcony is not a thug in a ‘Batman’ film, but someone we elected to Congress? Or that the public persona these folks display is so radically different from how they behave otherwise? It’s that he went after a NY1 reporter!”

“New York 1 is always there for us!” Stewart exclaimed. “It’s the channel my cable box reboots to. So that no matter what I was watching, it says, ‘Hey, guess who was just murdered in Brooklyn?’ It gives us weather on the 1s.  The 1s! Not the 2s!  Because the 2s is for suckers, for losers, for f—ing Philadelphia, that’s who it’s for!  It’s the 1s! So before you throw that reporter off a balcony, Congressman, just know that once we hear about it from New York 1’s The Balcony Murder Report, we’re coming after you.  Because if it wasn’t for the greatness of New York 1, we could’ve cancelled our Time Warner subscriptions a long time ago.”

Watch Stewart take on the congressman, around the 4:55 mark: