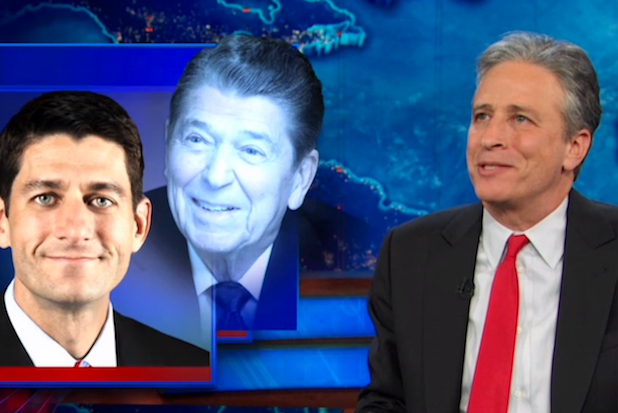 Jon Stewart can’t get over the Republican Party’s rightward lurch.

“The Daily Show” host kicked off Tuesday’s show by noting that Rep. Paul Ryan and House Speaker John Boehner, two fiscal and social conservatives, are under fire from the Tea Party for reaching a budget deal with Democrats that averts another government shutdown. Ryan’s fall from grace was particularly noteworthy, Stewart said, because of his previous status as the Second Coming of Ronald Reagan.

Stewart noted that even Texas Senator John Cornyn, a budget slashing conservative, is facing a primary challenge from the right in the form of Tea Party darling, Rep. Steve Stockman. What, Stewart wondered, had Cornyn ever done to the Tea Party?

“The National Journal named him the second most conservative senator behind only Alaska’s representative, painting of Jesus drilling for oil,” Stewart said.

But there were more surprises in store, namely footage of former Alaska Governor Sarah Palin telling Republicans that it was time to stop worshipping Ronald Reagan because he’d been too soft on illegal immigrants.

“When Ronald Reagan’s just another Hollywood liberal you got to say to your party, are you kidding me?” Stewart said.