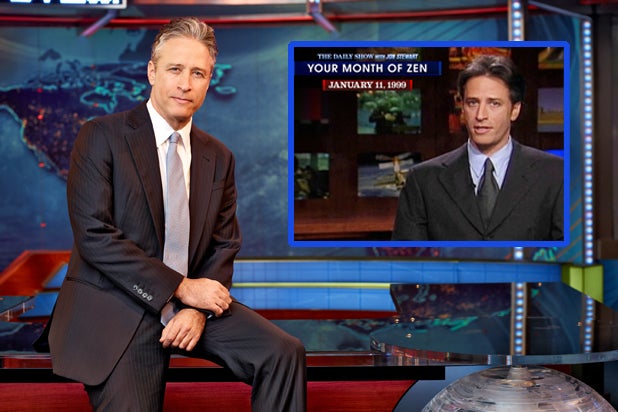 Just 24 hours from about now, we’ll know how many millions of viewers tune in Thursday to watch Jon Stewart say goodbye to his longtime “Daily Show” home. But before Nielsen knows those numbers, there’s plenty of other data to crunch for a statistical look back at the host’s run.

Speaking of “Rosewater” and numbers, the film was unfortunately a bust, grossing a little over $3 million domestic with no foreign release.

From film to a brief overview of social media, where many top “Daily Show” clips are shared, but Stewart himself doesn’t really have a presence. “The Daily Show” itself has 3.7 million Twitter followers; on Facebook, it has 4.8 million likes. On Instagram, “TDS” has 115,000 followers.

While Comedy Central boasts 4.3 million subscribers on its official YouTube page, unlike other late night shows, the Google video site is not the go-to for “Daily Show” clips or episodes. The Viacom cable channel prefers to post those videos on its own website, though Comedy Central declined to provide viewing stats to TheWrap for this story.

Stewart will sorely missed from the daily late-night landscape, as both a recognizable and likable figure. In 2014, TheWrap conducted a Q Score study of late-night TV hosts, measuring how well-known and preferred a personality is. Stewart finished with a solid 16 Positive Q Score, tying Seth Meyers and finishing third behind Colbert (20) and Oliver (18). His recognition ranking was a little lower in the hierarchy, but still strong. Read more details on the measurement and rankings here.

Now over to the all-important TV ratings, numbers that Comedy Central also elected not to share, but what may ultimately prove to be the numerical way Stewart is remembered — beyond of course his aforementioned impressive quantified longevity.

With no traditional season for late-night, there are two ways to study “The Daily Show” ratings: One can average actual calendar years, which is below in line graph form, or calculate September “season” start to the same night the next year. The latter is represented in the chart immediately below, while the January-December numbers are plotted out in a graph lower in this story.

Here are the September-September numbers in both household ratings and total viewers:

Also Read: Jon Stewart Reveals How 'Daily Show' Gets Those 'Crazy' Interviews: 'We Bring a Camera With Us' (Video)

As you can glean from the ratings chart, the 12-month period beginning September 2008 saw the most total viewers, with an average of 1.69 million. The household rating was a 1.14 — also a show high.

We’ve included the three Craig Kilborn-hosted seasons before Stewart took over for comparison.

And below is the pretty line graph plotting the last 14 years of “Daily Show” averages as the January-December calendar sees it. As readers can see, Stewart hit a total viewer high in 2012 and a demo high in 2008 — the election years that Barack Obama dominated. The first few Stewart seasons were unavailable by this measurement.

Finally, Stewart has been a regular on the Emmy podium too. “The Daily Show” has won 20 Primetime Emmy Awards. All told, it can tally 18 additional major award wins and 99 nominations.

Expect a few more from the farewell season. As Comedy Central’s preferred hashtag says, #JonVoyage, good sir — and thank you for the memories. There are simply too many to count.