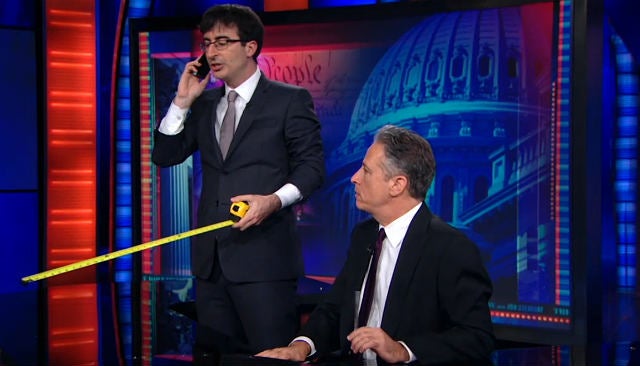 Jon Stewart promised a "much classier" version of "The Daily Show" while John Oliver hosts for the summer — but that's not the tone Oliver set with Stewarts's goodbye.

On Thursday's "Daily Show," Stewart tried to do his final "Moment of Zen" before the summer break — and found Oliver lurking under his desk, already taking measurements and barking orders about redoing the set in pink. He seemed surprised Stewart was still around.

"Oh wow, you're still here," Oliver said. "Looks like we have us an awkward situation on our hands."

Stewart then began what was supposed to be the Moment of Zen — and Oliver interrupted.

"Hahaha! It's my show now! You can't even throw to Zen without me butting in. Hey look! I've got your pens! I'm putting them in my pants," Oliver said, and then did just that.

And the transition had started so seamlessly. Stewart promised Oliver would be a more than capable replacement, promising to check in to make sure he was "feeding the plants and watering the children."

"This show will be much classier while he is hosting. You have my word that on my return, it will instantly drop back to the level you have long expected of it," said Stewart, who also said he was taking a break to undergo a "massive plastic surgery makeover."

In fact, Stewart is taking a break to direct his first film. It is about Maziar Bahari , an Iranian journalist who was locked up after speaking with "Daily Show" correspondent Jason Jones. The film, "Rosewater," is Stewart's adaptation of Bahari's book, “And Then They Came for Me: A Family’s Story of Love, Captivity and Survival.” Stewart played the segment Thursday that came before Bahari's imprisonment.

He also offered a message to fans.

"I will miss you far more than you will miss me and I can't wait to get back. Thank you for your indulgence," he said.